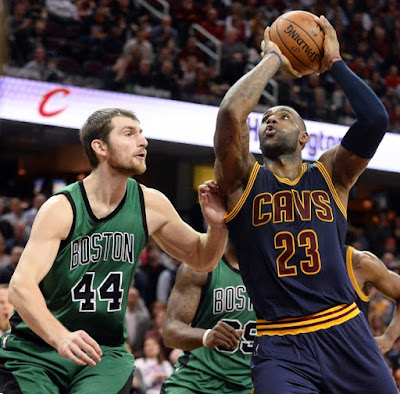 The Celtics have put Tyler Zeller on waivers, which becomes the latest move by Danny Ainge to create salary cap space for the possible signing of free agent Gordon Hayward.

Hayward, who is currently visiting Boston today, has narrowed his chooses down to Miami, the Celtics and Utah, where he's played his entire six-year career and who he plans to meet with at some point on Monday in San Diego (according to sources).

While no timetable has been given on when Hayward will choose where he'll play for the next four-to-five years, the 6-foot-8 swingman is expected to make a decision some time this week.

The Zeller move comes as no surprise with the Celtics waiving the seven-footer before his salary of $8 million would have become guaranteed after today's deadline.

Zeller appeared in only 51 games for the Celtics last season averaging 3.5 points and 2.4 rebounds in just 10.3 minutes per-game.

Ainge requesting waivers on Zeller comes less than 24 hours after it was reported that Celtics free agent Amir Johnson, had agreed to sign a 1-year, $11 million deal with the Philadelphia 76ers (according to ESPN). On Friday the C's announced they made a qualifying offer, worth $4.1 million, to big man Kelly Olynyk, making him a restricted free agent.

There's still no guarantee Olynyk will be in a Celtics uniform next season, especially if Hayward signs with Boston, reportedly at a little over $130 million over four years. At which point, expect Ainge to renounce the Canadian's qualifying offer and role with a younger frontcourt of Euro-League star; Ante Zizic (drafted No. 23 overall in 2016), Guerschon Yabusele (drafted No. 16 overall in 2016) and newly signed, German power forward; Daniel Theis to play alongside Al Horford.