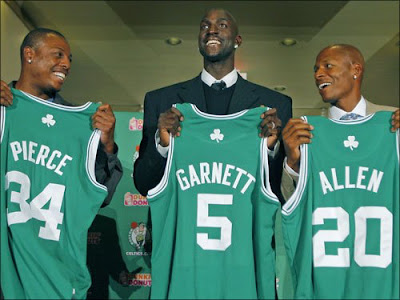 The Celtics will celebrate this upcoming season regardless of results from Brad Stevens' version of the current roster, as it will mark a decade since the raising of the franchise's 17th banner.

There would be no such celebration without the moves made by Danny Ainge to create another "Big-3" in Boston, which kicked off a new era when a trade to acquire former league MVP Kevin Garnett, thus bringing that championship pedigree for Celtics fans to witness for the next six years.

10-years ago on this very day (July 31, 2007), Ainge pulled off the biggest blockbuster at the time for one player -- trading Al Jefferson, Theo Ratliff, Gerald Green, Sebastian Telfair, Ryan Gomes and two future first-round draft picks to Minnesota in return for Garnett.

After the Celtics traded the No. 5 pick in the 2007 draft to the Seattle Sonics (now the OKC Thunder), for what turned out to be Jeff Green, for Ray Allen and Glen 'Big Baby' Davis, it would take the next five to six weeks to not only put a deal together but convince Garnett that Boston was the right place to compete for a championship ring after playing over 12 years in Minnesota.

With no Twitter or other social media platforms to leak negotiations between the Celtics and the Timberwolves in existence, the seeds were planted to form the NBA's first 'super-team.'

The final piece needed once the historic trade was complete for the Celtics was to give Garnett a three-year extension, worth over $100 million, because without it, the 10-time All-Star would have opted out of the last year of his deal ($23 million), making him a free agent in the summer of 2008, image that?

The Celtics didn't care about paying luxury taxes as they became immediate title-contenders the moment the ultimate game-changer in Garnett joined forces with Allen and Paul Pierce, two vital players that were still in their prime. It turned the franchise from a 24-win laughing stock four months prior to national TV headliners.

If there was still any doubt before the 2007-08 campaign that it would take time for the new 'Big-3' to mesh in their first year, it quickly vanished when the Celtics would go 29-3 to start the season and finish with a 66-16 record before going on to win the franchise's first championship in 22-years.

So were the risks Ainge took a decade ago to win a ring as an executive and bring smiles to the faces of the Celtics faithful worth it?

The answer is: YES!

While Garnett (now works at TNT), Pierce (works for ESPN) and Allen (trolling Celtics fans) have officially retired, Ainge still maintains the same mindset of winning a championship all these years later when it comes to this current Celtics roster.

With the trade of Avery Bradley, the last link to the KG and Pierce era, plus the signing of Al Horford last summer at four-years, $113 million and Gordon Hayward this month worth $128 for four-years, the Celtics have been taking more risks to pair alongside their All-Star and this past season's MVP candidate Isaiah Thomas to build another contender in the process.

Can the Celtics beat the NBA Champ Warriors in a seven-game series? Probably not, but with the drama running deep in Cleveland these days, including the firing of G.M. David Griffin, not acquiring Paul George at the last minute of a potential three-team deal and now a trade request from Kyrie Irving, the turmoil in Cleveland have teams in the East salivating at the mouth to knock the Cavaliers from the top spot.

Not to mention if Irving does indeed leave Cleveland, the Celtics would only have to worry about one more year of LeBron James in the conferance, if all indications are correct when it comes to Bron-Bron wanting to take his talents to L.A. in the summer of 2018.

Despite it being almost 10-years since the last championship banner that was raised at the TD Garden, the 18th does not seem too far away considering all that moves Ainge has made happen since 2013 when he traded away Paul Pierce and Kevin Garnett for what began this current era for the Celtics.

On a day like today it's good to look back and reminisce if you're a Celtics fan, but also look forward to a bright future that will be worth celebrating sooner than most think.