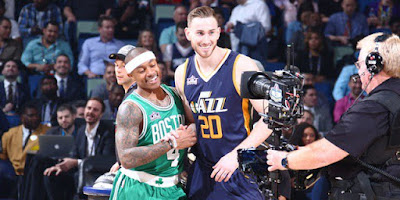 Free agent Gordon Hayward has agreed to sign with the Celtics, according to multiple reports, including Chris Haynes of ESPN, who first broke the news.

While Haynes' breaking news story is met with other conflicting reports, including ESPN's Adrian Wojnarowski, who is saying Hayward hasn't made a decision yet, Adam Himmelsbach of the Boston Globe also co-signed Haynes' report stating that Hayward will sign with the Celtics. The top-tier free agent visited Boston on Sunday after talking to Miami on Saturday and met with the Jazz on Monday.

Gordon Hayward's agent, Mark Bartelstein, tells ESPN: "Gordon hasn't made a decision yet. We are still working through it."
— Adrian Wojnarowski (@wojespn) July 4, 2017

The Celtics reportedly put together a nine-hour presentation for Hayward, one that included a visit to Fenway Park -- where he watched a montage at centerfield, filled with great Boston sports moments and videos of former Celtics players talking about what it means to play in Boston. Hayward also spent time with Isaiah Thomas before heading to Utah, where the Jazz did their best to convince their star to stick around.

If the Celtics do sign Hayward, the deal is expected to be a four-year max contract, worth just over $130 million.

Bringing in Hayward would reunite him with his college coach -- Brad Stevens -- who in 2010 led Butler to their first trip to the NCAA National Championship. It would also give the Celtics an All-Star scoring wing who is coming off  of the best season of his career.

Alongside, Thomas and Al Horford, this would be the most talented team Danny Ainge and the Celtics have complied since the days of Paul Pierce, Ray Allen and Kevin Garnett. If the signing goes through, it would give Boston another 20-point scorer to complement Thomas and increase its chances of passing the Cavaliers and making another NBA Finals appearance.