Report: Celtics are interested in trading for Marc Gasol 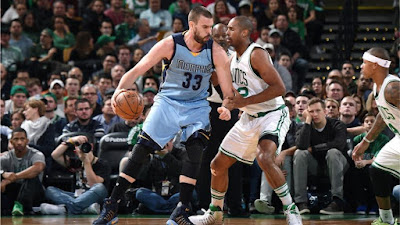 Gordon Hayward has agreed to sign with the Celtics, but is Danny Ainge not done adding to his roster yet?

According to Chris Mannix of The Vertical, two league executives told him that Boston is looking to possibly make a run at Memphis Grizzlies center Marc Gasol. The Celtics, who agreed to sign Hayward at $128 million, for four-years on Tuesday, could challenge the Cavaliers, on paper, with a huge roster addition like Gasol.

The three-time All-Star, who's 32, has three years remaining on his current deal, including a player option for 2019-20. Gasol's contract is worth roughly $23 million each of the next two seasons.

Acquiring Gasol would not only signal a win-now move for the Celtics, but it would give Boston some much needed frontcourt depth, after waving Tyler Zeller earlier this week, watching Amir Johnson head to the 76ers in free agency and now renouncing Kelly Olynyk's qualifying offer as well.

The Celtics were also man-handled in the paint during the Eastern Conferance Finals last May, adding Gasol could give the C's a chance to dethrone the Cavaliers.

The Grizzlies, who also lost Zach Randolph to the Sacramento Kings this week, seem to be in the process of rebuilding and now would be the best time to strike a deal that would most likely involve one of the Celtics future first-round picks and salary to match.