ESPN projects the Celtics to win the East this season 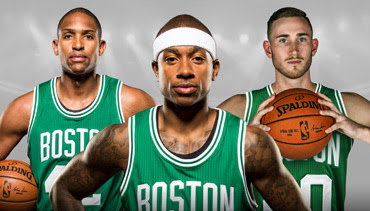 Don't look now, but the well known four-letter network and 'world-wide leader in sports' has made a prediction that should make Celtics fans somewhat happy for the upcoming season.

According to ESPN's Kevin Pelton, who published his projected 2017-18 records and standings for each NBA team on Thursday, believes the Celtics will finish first in the Eastern Conference, ahead of the Cleveland Cavaliers come next April.

But before you pencil in the C's taking on the Warriors in the Finals just yet, let's review two facts about the projected top-two teams in the East:

The Cavaliers are dealing with Kyrie Irving no longer wanting to play alongside LeBron James anymore and Danny Ainge added an All-Star in Gordon Hayward to join forces with Al Horford and Isaiah Thomas.

Pelton notes that despite being projected to finish as the No. 1 seed, last year's 'overachieving Celtics' should win no more than 49-games in the 2017-18 campaign due to their many close margin of victories from a season ago.


"...they outperformed their plus-2.6 point differential, which is more typical of a 48-win team. Boston also benefited from opponents shooting 33.2 percent from 3-point range, the league's second-lowest mark. Both categories tend to regress heavily to the mean, so the Celtics would have been in for a steeper decline had they not added [Gordon] Hayward. Still, given that Boston didn't have that same good fortune in the playoffs, the Celtics should be improved when it really counts." [ESPN]


For those of that are scratching their heads on the backhanded 'compliment' by Pelton as the Celtics finished with a record of 53-29 last Abril, my understanding of his logic is simply that he believed the C's should have been a 48-win team last season, but they clearly 'overachieved.' Now this year, with a roster that on paper has improved (except maybe in the rebounding and rim protecting department) offensively, will only win one more game than a typical 48-win team that actually won five more games in 2016-17, got it.

If you understand RPM or real plus-minus metrics that ESPN has been using to make these predictions, it's a system that measures a net score (plus or minus rating) of each player while on the court, but it isolates the impact of said player by adjusting the effects of his teammates and opposing player.

If Isaiah Thomas, who ran the offense and normally put the Celtics on his back in the fourth quarter, especially in tight games last season, is getting less touches and putting up less shot attempts this seasons, his RPM rating will be greatly affected. With the addition of Gordon Hayward and his RPM from a season ago, that could mean less or the same amount of wins for Boston, according to to the metrics.

Do I agree with Pelton? Not necessarily, I believe the Celtics should be able to at least duplicate the same amount of 53 wins they achieved last season. But injuries (Thomas' hip) and chemistry (so many new faces) could play major factors when Brad Stevens looks at his roster in the fall.

Another thing to consider is the Cavalier affect, as currently constructed, they are still the team to beat in the East regardless of ESPN's projection, which has the Cavs winning .2 less games than Boston. But if Cleveland moves Kyrie Irving, that could alter the overall landscape in the conferance, giving the Celtics a better chance to add to their win total in the process.

What do you think of the latest projections for the upcoming seasons?