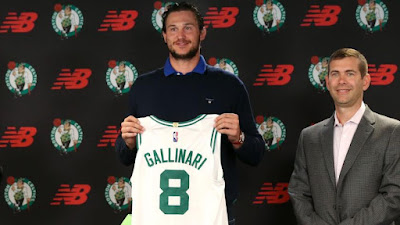 Danilo Gallinari has reportedly been diagnosed with a torn ACL, according to The Athletic's Shams Charania.
The Celtics forward initially injured his knee in a FIBA World Cup qualifier for the Italian national team last weekend, before news broke Friday morning contradicting the original diagnosis of a left torn meniscus following a thorough team analysis.

The Celtics and Gallinari worked together this week on a complete, thorough analysis following the knee injury on Saturday during FIBA play for Italy. The typical ACL recovery time ranges from 6-to-12 months. https://t.co/dg86TQUjoi


This comes at the worst possible time for Gallinari, who turned 34-years-old last month after inking a two-year, $13.3 million deal with the Celtics in July, and now has to rehab the same surgically repaired knee that sustained a torn ACL back during the 2012-13 season.

"This has been a tough week for me as I've learned the extent of my injury. This game means everything to me and not being able to be on the court with my Celtics teammates hurts," Gallinari wrote in a statement via Twitter. "I plan to give everything I can to the Celtics organization and my teammates as we hunt for a title."

It's not likely Gallinari will make his Celtics debut this season, as ACL injuries typically have a return timetable of 6-12 months. With training camp set to begin in roughly four weeks, Boston may seek a Disable Player Exception from the league and or sign someone for the veteran minimum.
In the meantime, Sam Hauser may become the beneficiary of more opportunities, while Ime Udoka and his coaching staff officially make any decisions on potential roster rotations.
Joel Pavón
Follow @Joe1_CSP