Celtics 116, Wizards 87: Jayson Tatum snaps out of slump, drops 51 in rout of Washington 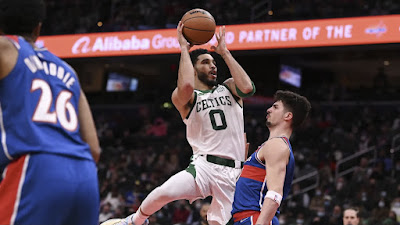 Jayson Tatum was the lone Celtics' hero Sunday afternoon, in a 116-87 blowout victory over the Washington Wizards at Capital One Arena.
The All-Star forward, who had missed 20 straight 3-point attempts over the past four games, hit six of his first seven from beyond the arc to snap out of a shooting slump. Tatum recorded a career-high of nine made 3s (9-of-14) on his way to dropping 51 points -- which 48 came in the first three quarters.

"When you're missing shots, you know what you're capable of, and sometimes you've got to laugh it off," Tatum said in his postgame presser. "It's as simple as sometimes you just don't make shots. You play so many games."

Tatum, who had 31 points at halftime -- the most by any NBA player this season -- finished 18-of-28 from the field, to go along with 10 rebounds and just three assists shy of a triple-double. He netted his 50th point on a drive to the hoop with 4:30 remaining, followed by a technical-foul free throw 35 seconds later, before checking out of the game to a standing ovation from a plethora of Celtics fans in attendance.

"That's an incredible feeling," Tatum said. "Seeing so many fans on road with a Tatum '0' jersey on -- something I don't take for granted. I understand there's 450 some-odd guys in the league, and they took the time to go buy my jersey."

Jaylen Brown had 18 points, 10 rebounds, while Marcus Smart returned to the lineup after missing six consecutive outings due to being in the league's Health and Safety Protocols -- to add 11 points, six assists to help the Celtics snap a two-game skid and get back to .500 at 24-24.
Bradley Beal led the Wizards with 19 points on 7-of-17 shooting from the floor and seven assists. Deni Avdija scored 13 points off the bench and Kyle Kuzma chipped in 12 points and seven rebounds for Washington -- who have lost three straight and are now 23-24 on the season.
The Celtics never trailed once after jumping to a 18-10 lead to start the first before using a 14-0 run in the second quarter to close the half that saw Tatum score 18 points in period alone. Boston took a 60-45 advantage into the break.
Back-to-back 3s by Tatum to put the Celtics up 89-62 with 2:33 left in the third, as they led by as many as 32 in the final frame to hand the Wizards their third straight loss.
It seemed like Tatum would remain at 48 points once the fourth quarter started, but he checked back in to a noticeable roar of cheers by the Celtics fans in the arena with 7:21 remaining. He surpassed the 50-point mark, but was well shy of his career-high mark of 60 points, to which C's coach Ime Udoka explained that didn't play a factor when he asked his starting forward to go back in.

"We were getting a little iso-heavy, stagnant there," Udoka said. "We've obviously had our troubles closing, so, get him back in and try to finish the game."

The Celtics will return home to host the Sacramento Kings (18-30) Tuesday night at TD Garden.