Bradley Beal calls Jayson Tatum 'the next face of the league' 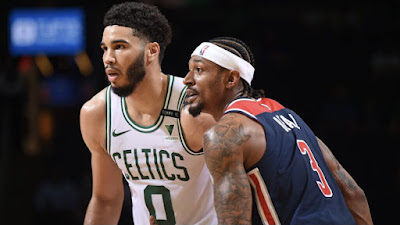 Bradley Beal has known good friend and fellow St. Louis native Jayson Tatum since they were kids and has been nothing but proud of the Celtics star for how far he's come.
The Wizards leading scorer says he believes that Tatum is just starting to scratch the surface and sky's the limit when it comes to his potential.

"To see him now, I'm barely growing my beard much, Jay got a full beard," Beal said on a recent episode of The Draymond Green Show. "To see him grow into this young man, bro, he's the next face of the league, and I told him that that is your goal."

Tatum, who is averaging a career high 27.0 points, 8.1 rebounds, and 4.3 assists this season -- including 33.7 points on 54.2 percent shooting in his last 10 games -- has led the Celtics make their turnaround and become title contenders.
While Tatum may have started the year off slow shooting percentage wise, the All-Star forward has now emerged as a league MVP candidate after winning Player of the Week honors for a second time this month and third overall so far this season.
Beal is not surprised that Tatum is being mentioned in MVP talks and says he should be every year if he continues to play like he has been as of late based on his talent and drive alone. He wants to make sure his childhood friend goes for it, especially when opportunities present themselves.

The Celtics at 46-28 have the fourth best record in the Eastern Conference and have currently won five-straight with nine games remaining in the regular season.
Joel Pavón
Follow @Joe1_CSP