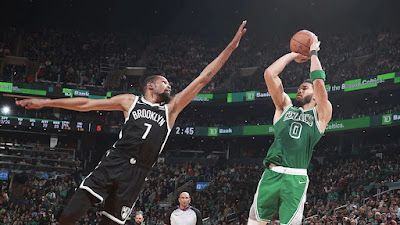 Jayson Tatum followed his 37-point birthday performance with a season-best 54 on Sunday afternoon, as the Celtics beat the Brooklyn Nets 126-120 at TD Garden.
The 24-year old All-Star forward scored 34 points in the second half to finish with 16-of-30 from the field, including 8-of-15 from deep.

"Be the best guy on the court each night," Celtics coach Ime Udoka said he told Tatum prior to tip-off against the Nets. "He takes pride in the matchup going against high-level opponents."

Jaylen Brown returned to the lineup after missing one game with a sprained ankle to drop 21 points (3-of-6 from 3), five assists, while Marcus Smart added 14 points and nine assists. Al Horford chipped in 13 points, seven rebounds for the Celtics -- who are now a season-high 12 games over .500 at 39-27.
Kevin Durant led the Nets with 37 points on 12-of-21 from the floor and 4-of-9 from beyond the arc, in just his second game back from a knee injury, to go along with eight assists and six rebounds. Kyrie Irving, who was booed each time he touched the ball, played his first game in Boston since Game 4 of the Eastern Conference Quarter-Finals last spring, struggled to get 19 points on 18 shot attempts and was also 2-of-6 from 3, but added six assists.

"Those matchups -- when you're playing one of the better teams in the league, two of the best guys -- as a competitor, those are the kinds of moments that as a kid you looked forward to," Tatum said in his postgame presser. "When those opportunities come, you try to make the most of it."

Bruce Brown had 16 points, five assists and LaMarcus Aldridge netted 14 points off the bench for Brooklyn, who have fallen to 32-33 and the ninth seed in the East.
Boston trailed 60-58 at the half, before outscoring the Nets 17-10 in the first five minutes of the third quarter, as it was a back and forth the rest of the period after eight lead changes. Brooklyn led by as many as nine, but the Celtics scored eight unanswered points to be only down 90-89 heading into the final frame.
The C's were ahead 108-100 with 6:26 left to play, as the Nets used a 11-2 run to take a short-lived one point lead. Boston went on a 13-4 spurt, which Tatum scored the first six and Brown the last five -- including a right corner dagger 3 at the buzzer that gave the Celtics a 121-115 advantage with 39.4 seconds remaining to put away the Nets for good.
Durant missed a jumper out of a timeout and complained he was fouled -- but there was a no call. Tatum surpassed his previous season-high of 51 after hitting four straight free throws -- with the chants of M-V-P! echoing around the Garden on the final two makes -- which is also the second-highest total of his career.

"It was chaos. Good chaos," said Marcus Smart, who was celebrating his 28th birthday, during postgame comments. "It was a fun game and it was a fun five minutes to be a part of."

Boston has won five of their last six and are 21-6 in their last 27 games with 16 left t0 play in the regular season.
The Celtics will head out on the road to face the Charlotte Hornets (32-33) Wednesday night.