Cedric Maxwell not happy with Kyrie Irving's logo stomp, says 'I am not letting this go' 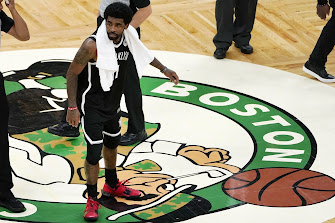 Two Celtics legends are not keeping quiet following Game 4 Sunday night and while there were two separate moments that involve Kyrie Irving, one of them is not getting a whole lot of attention.
While a fan that threw a water bottle at Irving following the Brooklyn Nets 141-126 win, was arrested and charged, it was the action just prior to that incident that has Celtics radio color commentator Cedric Maxwell not happy with the All-Star point guard.
The 1981 NBA Finals MVP, who played in Boston from 1977-1985, expressed his displeasure towards Irving and his choice to stomp on the Celtics center court logo at TD Garden.

"What was the purpose of going out and stomping on the floor and walking off? There was no need for that," Maxwell said on NBC Sports Boston Monday night. "You're a great player. You just played a great game. You walk into a building. You walk onto the middle of the floor. Everybody look at me. Let me put my shoes out here. Let me wipe this dog poop off my shoe right now in the middle of the floor and act like nothing happen. No, we’re mot letting that happen. That was some bull and I hated that. And Kyrie, you’re much better than that as a player, as an athlete. Look, take responsibility. I just want somebody to ask him, ‘Dude, what did you do that for? What was the reason behind it? Did you have something on your shoe? Did you walk out and step onto dog poop or something? What happened there?'
"I wish this was during the 80's and during the time where a guy could really retaliate against Kyrie for doing something like that. I talked to Ricky Mahorn, a guy who played against the Celtics, and asked him about what happened. He said, 'I couldn't believe what Kyrie did by stepping on the floor like that.' Remember, the game was over. Take your butt back to the locker room. That's what you needed to do. I am not letting this go. You're too good of a player. You played a great game. What is the purpose in what he did? Somebody please tell me, what was the purpose?"

Kyrie appeared to step on the Boston logo as he greeted his teammates at half court postgame.
(via @yornoc74) pic.twitter.com/thcXjX15He— ESPN (@espn) May 31, 2021

Earlier in the day Basketball Hall-of-Fame inductee and NBA champion Kevin Garnett also let it be known that he didn't appreciate Irving stomping on the face of "Lucky the Leprechaun," while posting about it on his Instagram story.

"We just gonna act like we didn't see that?" Garnett wrote. "You can't do that. That's not cool on no level…All of us need to be better."

Kevin Garnett did not like Kyrie Irving stomping on the Celtics logo. pic.twitter.com/R4pO9HSmUy


After getting booed in Game 3 on Friday and putting up only 16 points on 6-of-17 shooting, Irving made a statement in Game 4 while hearing it once again, but this time from more than 17,200-plus fans at the Garden -- scoring 39 points and grabbing 11 rebounds in 41 minutes to help the Nets take a 3-1 series lead over the Celtics in this first round best-of-7 matchup.