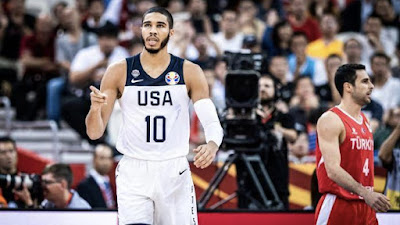 Celtics All-Star Jayson Tatum has committed to play for Team USA in next month's Tokyo Olympics, sources told Yahoo! Sports.
Chris Haynes reported that 23-year-old's commitment to USA Basketball comes the same day as Damian Lillard and Draymond Green, who have also committed, according to The Athletic.
Tatum is coming off a career-year with averages of 26.4 points, 7.4 rebounds and 4.3 assists for the Celtics. The fourth year forward turned it up a notch in the second half of the season following his bout with COVID-19, especially in the month of April -- scoring 53 points in an overtime win over the Minnesota Timberwolves and dropped 60 points also in an comeback overtime win against the San Antonio Spurs -- both at TD Garden.
Despite Play-In stats not being counted towards the regular season or playoffs, Tatum netted 50 points to help beat the Washington Wizards 118-100. Though the Celtics would end up losing to the Brooklyn Nets during the first round in five games, Tatum averaged 30.6 points per contest, including a 50-point performance in a Game 3 win.