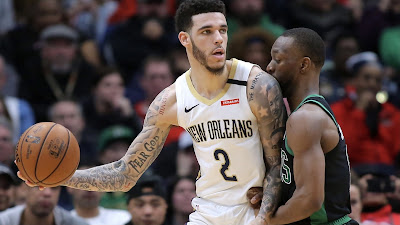 After breaking the internet earlier this month promoting Brad Stevens to President of Basketball Operations, the Celtics quickly became the center of attention early Friday morning.
Making his first move as the Celtics' GM, Stevens completed a blockbuster trade sending Kemba Walker and this year's No.16 overall pick to the Oklahoma City Thunder. In return, the C's acquired Moses Brown and reunited with Al Horford, pushing the team around $7.9 million under the luxury tax for the upcoming season.
While the Celtics upgraded their front-court, the move leaves Boston with a glaring hole at the point guard position-- something Stevens likely will address in the offseason. With Payton Pritchard and Marcus Smart as the only active point guards on the roster, it seems unlikely the Celtics will roll with either as the starter.
Although they created a little more wiggle room trading away Walker's max-contract, they also acquired Horford's two year, $53 million contract ($41 million guaranteed) which still hinders their ability to acquire star talent to try to replace Walker.
Considering those circumstances, who could the Celtics target in free agency or via the trade market? They no longer have a first-round pick this year, so they won't be able to address the position in the draft. I look into some potential options (realistic or not) that could fill the Celtics' biggest void.

Kris Dunn (Player Option)— Kris Dunn is one of the less exciting options on this list, but could be one of the more realistic. The former No.5 overall pick has a $5 million player option this offseason and could bolt for a bigger role.
As an afterthought on the Hawks behind Trae Young, Dunn could be looking for a bigger role on a new team. He played only 11 minutes per game this past season— appearing in only four games.
The Celtics currently strapped financially could look to add a cheaper option in Dunn who brings some playmaking and defense to the mix.
He's only one year removed from playing 24 minutes a game with the Bulls, but underperformed struggling in his role.
Dunn is no longer the exciting two-way player he entered the league as but has shown flashes of his scoring, especially during the 2017 season where he finished with a career-high 13.4 points per game while dishing six assists.
Boston hasn't been able to find a defensive-minded point guard that can score since Terry Rozier left town and Dunn could at least provide the Celtics with some depth at the position. He won't be able to single handedly replace Walker's production, but could be an affordable option for the Celtics at point guard if they can't find anyone on the trade market.
Lonzo Ball (RFA)— Depending on how the Pelicans feel about Lonzo Ball's future with the team, he'll certainly be one of the most attractive free-agents this offseason with multiple teams in need of a new floor general.
The Celtics as one of those teams could be in the mix to acquire his services whether that's through free-agency or pulling off a sign-and-trade for the 23 year-old.
While Ball stated he would "love to be back" with the Pelicans, the two sides failed to come to an agreement last offseason. Of course New Orleans will have the opportunity to match any offer he receives which would make it very difficult for the Celtics to sign him, but if the Pelicans decide to move in another direction a sign-and-trade could be in the works.
When at the top of his game, Ball is one of the league's elite passers and has improved his offensive game-- particularly shooting. Struggling with his shot mechanics and form coming into the NBA, Ball has tweaked his shot-- quietly shooting at a career-high 37% clip from deep.
It's important to recognize adding Ball would hard cap the team—leaving little room to improve the rest of the roster. Unless they clear up more space, it seems unlikely he ends up in Boston.
Still young and with plenty of potential Ball likely won't reach the free-agent market this summer, but he's certainly a player the Celtics would covet if he comes available.
Malcolm Brogdon (IND)— Playing over 70 games just once in his career, Brogdon has always dealt with injuries but the talent is certainly there. That continued last season, where he missed 16 games nursing knee, back, and ankle injuries.
Brogdon has steadily improved his points per game every single year and performed at a high level this past season when healthy, scoring a career-high 21 points per game. Displaying his improved scoring ability, he has proven he’s capable of carrying the scoring load, distributing (5.9 assists) and can defend at a high level-- all traits the Celtics desperately need at the point.
Trading for Brogdon would obviously require the Pacers to be on board, but should the Celtics offer a package of picks and matching salaries, it could be a possibility.
They also have some trade exceptions to work with if they get rid of some higher salaries like Smart ($14.3 million cap hit) or Tristan Thompson ($9.7 million). They currently have the $11.05 million exception from the Gordon Hayward trade which expires in August.
The Celtics would have to do some cap gymnastics to get a deal done, but it remains to be seen whether teams including the Pacers view any of Boston's remaining assets valuable.
Kyle Lowry (UFA)— It's unclear whether Lowry would even be in the discussion, as he's been rumored to be interested in joining the Heat or the Lakers. However, the Celtics clear up some space, he could at least be on their radar.
Lowry has everything you want in a point guard-- he can pass, shoot, defend when needed, is a great leader, and has championship experience-- winning a title with the Raptors in 2019. Although he missed 46 games last season with various injuries (foot infection, sprained thumb, ankle), Lowry still produced at a high level totaling 17 points, and 7.3 assists shooting 43% from the field.
The only problem with Lowry is his age. Currently 35 years old, Lowry won’t be the answer long-term and will likely demand a lot in free-agency. The Celtics would likely need to unload some more salary to make it worth, but if he’d be interested in Boston, it would fill a big void.
Adding another veteran presence to the locker room that knows what it takes to win a championship could be huge for an inexperienced Celtics roster. It’s likely a stretch that he ends up in Boston, but it's at least a possibility.
Other Potential Options: Dennis Schröder (28), Mike Conley (32), Derrick Rose (32); Don't count out an Isaiah Thomas reunion

With their current roster the Celtics simply aren't a contender in the East. Stevens likely has more up his sleeve.
With a loaded free-agent class in 2022, the Celtics could be holding off a season to be buyers next offseason. Players like Russell Westbrook, Zach Lavine, and Bradley Beal to name a few could be potentially targets for Boston.
With Jayson Tatum, Jaylen Brown, Al Horford, and Demetrius Jackson's (cut in 2017) cap hits as the only guaranteed money next offseason, the Celtics could end up creating up to $34 million in cap space in 2022. More realistically that number could be anywhere in between $20-$30 million if they decide to pick up some options.
That would require declining team options and waivers, but by making a couple more moves having enough cap room to acquire a star player in free-agency, the Celtics could address a need a year from now.
It's all speculation now, but the Celtics will have options to surround their franchise cornerstones with more talent. Whether that includes any of these players remains to be seen, but Stevens will have his work cut out for him after trading away a player that was once considered the Celtics' third star.