Al Horford on his Celtics return: 'Really appreciate how special of a place that Boston is' 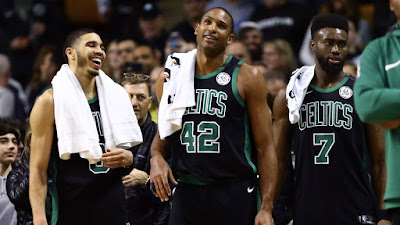 Al Horford expressed how happy he is to be back in Boston during his re-introductory presser with the Celtics media on Thursday.
The veteran big man used the term "excited" more than once to describe what it felt like to have yet another chance to help the franchise towards becoming a contender once again.

"Just really, really happy to be back," Horford said. "Really appreciate how special of a place that Boston is. For me, being away from it, seeing the type of city that it is, what the team is all about, it's something that I really missed.

"Obviously, I feel like I learned a lot, and sometimes, in my case, change was for the better. I'm just very grateful to have a second opportunity to be back here and to continue to work on what I started here."

The Celtics new president of basketball operations Brad Stevens pulled the trigger on acquiring a familiar face in Horford for Kemba Walker last week, as the first major move in his new role.
Nearly two years after opting-out and becoming a free agent to sign another max contract with the Philadelphia 76ers -- where it wasn't a good fit, only to be dealt to the Oklahoma City Thunder last September -- Horford calls his return to Boston "a little surreal."

"Five years ago when I had to make a tough decision and leave Atlanta, Danny [Ainge] and Brad, they sold me on this -- the culture, what we're trying to build in Boston, and winning, getting that banner 18," Horford said. "And that's something that really excited me, really motivated me. And it was something that we were working towards.

"Obviously I wasn't able to get it done when I was with the group. And now that this time has passed and I get an opportunity again to do that, for me it's looking at what kind of purpose, what can I do, what can I do to accomplish that. And I’m lucky enough to get a second shot to be with this group."

While the roster looks a lot different than it did when Horford bolted in the summer of 2019, Jayson Tatum and Jaylen Brown are now All-Stars. Plus, Robert Williams has developed into a starting NBA center, especially when healthy. According to Horford, all three welcomed him back to the Celtics following the announcement of the trade becoming official.
Horford also added how he's been particular impressed with Williams' progress since they were last teammates.

"He has such a good feel for the game defensively and on offense as well, trying to help him be in good positions," Horford said. "I'm going to be in his ear, and we are going to be figuring things out together.
"I'm excited for him. He knows and he's starting to understand everything, taking care of his body and making sure he's putting in the work. I'm really excited for what's ahead for Rob."

When asked if he regretted leaving Boston the first time, Horford said his decision is in the past, despite saying back then -- he may have reconsidered if he knew Walker was signing with the team.

"I didn't know if I was going to get another opportunity or a chance to be in this position," Horford said. "Obviously things didn't end well then, but now I feel we have a fresh start. I can help the team, make an impact. I feel the guys are very driven and we have a lot of work to do. That's the reality. I actually embrace that part of it, getting to work with this fresh opportunity."