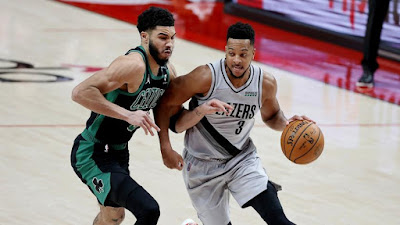 It's been quite the month of June for the Celtics to kick-off their summer, as Danny Ainge stepped down and Brad Stevens moved from head coach into the president of basketball operations role.
Stevens in his first few weeks on the job has traded Kemba Walker for Al Horford and hired Ime Udoka as the Celtics new head coach.
After two major moves, Stevens is clearly not done making changes and it appears that Portland Trail Blazers guard CJ McCollum may be on GM Brad's radar.
According to Trail Blazers beat writer Jason Quick of The Athletic, McCollum has been the subject of recent trade rumors and the Celtics could be in the mix when it comes to teams that could inquire about the Portland guard.

"I've also heard Boston could be interested in a player like McCollum, and I've always thought Marcus Smart and his defense would be a great pairing in Portland (obviously it would take more to make salaries match, but Smart would be a great start)," Quick wrote.

Sports Illustrated's Chris Mannix also believes a trade for McCollum makes sense for the Celtics since he's "the kind of player that would complement Jaylen Brown and Jayson Tatum well."

"He's a lead guard. He's offensive-oriented. He's played alongside a volume scorer in Damian Lillard before, so this isn't going to be new to him," Mannix said on NBC Sports Boston's "Early Edition." "I think a change of scenery would do CJ McCollum well. He's also under contract for three more years. I think he’d be an excellent fit alongside these young guys."

While Mannix did mention that the Blazers have told McCollum he's not getting moved, Quick is convinced it's "probable, if not certain" that McCollum gets traded.
Both the Celtics and the Trail Blazers were eliminated in the first round of the playoffs 4-1. If a trade offer were to be made, salaries would have to match. McCollum is set to make $30.9 million next season and $100 million over the following three years. If Boston doesn't want to include Jaylen Brown in such a deal, Marcus Smart or Tristan Thompson would have to be involved somehow.
More than likely Horford wouldn't be traded after being re-acquired recently and the Trail Blazers wouldn't have a need for the veteran big with Jusuf Nurkic still on their roster.
Either way, Smart, a two-time All-NBA Defensive First Team guard would be a tremendous help for the Blazers, who finished second to last in defensive rating this past season.
For the Celtics, trading away the team's longest tenured player that happens to be on the final year of his contract, is easier said than done. However, with Kemba Walker's 19.9 points and 4.9 assists per-game average now gone, McCollum's 23.1 points and 4.7 assists per-contest average -- along with a 45.8% from the field and 40.2% from 3-point range -- are roughly better numbers overall when you put the two guards side-by-side.
McCollum turns 30 in September, as this rumor will be interesting one to keep an eye on for the rest of the off-season.