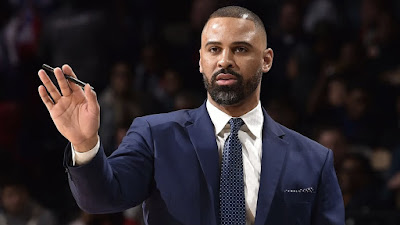 The Celtics head coaching search has concluded, as Boston is reportedly hiring Brooklyn Nets assistant to replace the recently departed Brad Stevens on the sidelines, according to ESPN's Adrian Wojnarowski.
Udoka gets his first head coaching job after nine years of being an assistant for the San Antonio Spurs (seven seasons) under Gregg Popovich, Philadelphia 76ers (one season) and the Nets this past season.

The 43-year old's lone season in Brooklyn ended once the team was eliminated by the Milwaukee Bucks in the semifinals and after knocking the Celtics out of the first round earlier this month.
Udoka comes highly recommended from Celtics All-Stars Jayson Tatum, Jaylen Brown and Marcus Smart -- who played for the now former assistant on Team USA in the 2019 FIBA World Cup. Brad Stevens took that into account as he sought out a new voice to connect with the roster's core.
The Celtics' new head coach also played seven seasons in the NBA, including stops with the Los Angeles Lakers, Portland Trail Blazers and Spurs, after going undrafted out of Portland State University.
Milwaukee Bucks assistant coach Darvin Ham and Los Angeles Clippers Chauncey Billups were also considered top candidates in the Celtics' search after having multiple interviews, per league sources.