Celtics in 'good position' to pursue Damian Lillard, according to Chris Mannix 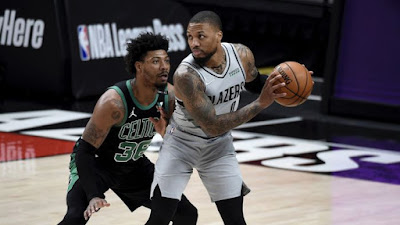 With "Trader Danny" Ainge officially retired (for now) after 18 seasons as the Celtics president of basketball operations, it may be time for his protégé Brad Stevens to make a splash in the Eastern Conference this summer.
Portland Trail Blazers' Damian Lillard has been linked to trade rumors involving multiple teams, including the Celtics after his team was eliminated 4-1 last week to the Denver Nuggets.
Despite Lillard's epic playoff performances over the years, the Blazers have only made it to the Western Conference Finals once in his nine seasons in Portland.
NBA writer Chris Mannix of Sports Illustrated made an appearance on WEEI over the weekend and says that Lillard's patience with the Trail Blazers is "reaching kind of a breaking point."

“He had that Instagram post right after the loss that seemed to suggest he's getting really frustrated with the outcomes of these playoff series," Mannix said. "He wants Jason Kidd (to coach) there. He wants to be in Portland, he's always said that. But there is definitely a league-wide sense that that team had plateaued."

Hours removed from a divorce between the Blazers and coach Terry Stotts, Lillard voiced how he wanted Lakers assistant coach Jason Kidd or Clippers assistant Chauncey Billups as a replacement -- both of whom are candidates to fill the Celtics vacant coaching gig.
While Kidd removed himself from consideration for the Blazers' search, that means the pairing won't happen in Portland, but it doesn't mean the two can't come together in Boston. But the price for a talent of Lillard's caliber will not come cheap.
The All-Star point guard will be entering a four-year, $176-million supermax extension with the Blazers next season.

"Lillard is going to be 31 next season and if you are going to trade him now is the time because that contract gets really onerous as it gets toward the back end of his years. It's in the $50 million-per-season range on that max deal. So if you are looking to maximize your revenue you have to look around to trade him."

Because of the young talent on the Celtics roster, Mannix says the team is in a "good position" to possibly swing a deal for Lillard, but nonetheless it may still require the likes of a Jaylen Brown to begin the conversation.

"You could put Jaylen Brown as the centerpiece of a deal that would include all the young guys on your roster plus future draft picks as well," he said.
"So I think it's possible. If Portland shops him, Boston is going to be in a good position. If you look around, Bradley Beal is not going to go to Portland because he's not going to re-sign there. You have to get guys to Portland that are on long-term contracts, and Jaylen Brown is one of those young guys, 24 years old, that would fit that bill."

Though the thought of moving Kemba Walker's contract as well would make the possible move a major upgrade at the point, is including Brown or even Marcus Smart worth the gamble for the very expensive contract of Lillard -- who's on the wrong side of 30?
That's one way Stevens could shake up a roster that finished 36-36 this past season and a first move as the Celtics new president basketball operations.