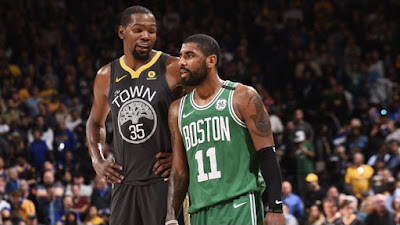 While most of the basketball world was led to believe that Kyrie Irving and Kevin Durant's plan to team up formed during the 2019 All-Star break in February of that season, it appears a prior conversation took place that got the ball rolling for their new partnership to form.
A new tell all book reveals details of Irving and Durant meeting in person when the Golden State Warriors were in Boston to face the Celtics a month before their infamous chat at All-Star Weekend.
Matt Sullivan, author of the book "Can't Knock The Hustle," writes that Irving and Durant first spoke about wanting to joining forces in January of 2019.
According to the book, the two best friends met at Irving's Weston, MA home for dinner the night before the Celtics hosted the Warriors. It was during that get together when Irving expressed his frustration with his teammates and the Boston media's "misperception" of him.

"He didn't like what his situation was," Durant said on All The Smoke Podcast last year, "and me either in Golden State. And it was just like, 'Hey, man, let's just see how this would work. Let's try it out.' And [then Dallas Maveriks center DeAndre Jordan] wanted to play with us to be that center for us that can kinda hold it down, and play for something, really — play for a team that's going somewhere, not just keep moving around and bouncing around to leave."

The book also reveals that Irving may have had his reservations when it came to racism in the city of Boston, that he never talk about -- until after the Nets' Game 2 win over the Celtics last month before having to play in front at a TD Garden crowd for the first time since taking his talents to Brooklyn. A close friend of Irving named Brett Carroll, said after the fact that may have played "a factor" in him leaving via free agency as well.
Furthermore, Irving was reportedly battling depression in 2018 following the death of his grandfather three weeks after his announcement that he would re-sign in Boston.
Despite his "promise," Irving told a friend from his hometown in New Jersey that he would be signing with the franchise he idolized growing up, the Brooklyn Nets around late May of 2019. The star guard officially inked a four-year, $141 million contract to team up with Kevin Durant more than a month later.
After an injured and shorten first season in Brooklyn (due mostly to COVID), Irving, Durant and James Harden find themselves one win away from an Eastern Conference Finals berth. Even with Irving currently out with an ankle injury, the Nets crushed Boston in five games, while he stomped on the Celtics logo before getting a water bottle thrown at his head that nearly missed him moments after Game 4 had concluded at the Garden.
Clearly, it's been an interesting two years to say the least between Irving, the Celtics and Nets.