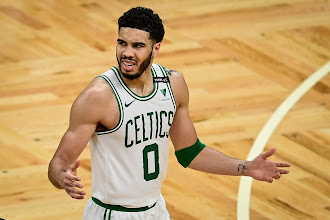 Jayson Tatum has finally broken his silence on being left off from any of this season's All-NBA Teams.
The Celtics All-Star forward made an appearance on a recent episode of Kicks' Beyond the Press Podcast to talk about missing out on a $32.6 million rookie extension bonus due to not being selected All-NBA.
If Tatum had made any of the three All-NBA Teams, his max rookie scale contract he inked last off-season would have increased from 25% to 30% of the salary cap over the length of the deal. Besides the obvious money aspect, the 23 - not 19 - year old is upset he didn't make it, saying he believes he was deserving of the honor more so than a potential bonus.

"I know I should have made it with the season I had," Tatum said. "I mean, $33 million on the line, obviously, that would make anyone feel some type of way.
"And I wasn't necessarily upset about losing the money. I think I just felt like the way I was playing, everything I did, I thought it should have been a no-brainer. I think I was just more frustrated with that."

While it's the media who votes on All-NBA, Tatum notes that the criteria isn't as clear as it should be.

"Is there a certain amount of games you need to play? Should you be in playoff contention?" Tatum said. "There's a certain amount of points you should average, depending on your position. I think there should be something like that in place because I think if you just allow people to just vote … and there's nothing set in place, like, 'you gotta play this many games', whatever it may be. I think that would help it out a lot."

With Tatum still being young enough to make plenty of more future All-NBA Teams throughout his career, none will most likely have the financial impact as this year's had.

"I know nobody's going to necessarily feel bad for me and [Jazz guard] Donovan [Mitchell] because we still get paid a lot of money," Tatum said. "But I just felt like I deserved to make it."

Meanwhile, Tatum will get an opportunity to win his first gold medal in next month's Tokyo Olympics, as he and best friend Bradley Beal are officially on the finalized 12-man roster for Team USA.
Joel Pavón
Follow @Joe1_CSP