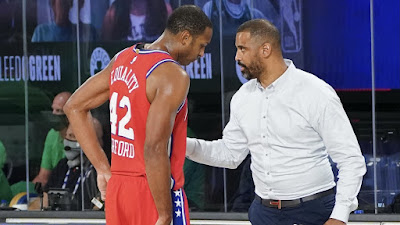 Al Horford was all smiles during his brief re-introductory press conference with the Celtics media late Thursday morning.
The veteran big man is looking forward to the challenge of helping turn a roster that finished 36-36 this past season back into an Eastern Conference contender.

"For me, it's what can I do? What can I do to accomplish that? And, I'm luck enough to get a second shot, to be with this group," Horford said during his presser. "I feel like it was a great three years for me but now we get a fresh opportunity. It's a huge challenge. I understand that I know it. But, I actually embrace that and I look forward to getting to work with the group of guys that we have."

While Horford is ready to get to work immediately, he's also excited to reconnect with Celtics new head coach Ime Udoka, as the two spent time together during "Big Al's" lone season with the Philadelphia 76ers. Though Horford's stint in Philly was brief, he says the two spent plenty of time with one another and is pleased with Boston's new hire.

"Ime's a great guy, him and I had a really good relationship," Horford said. "He was always very professional. His views on the game, you know. Defensively, him and I spent a lot of time talking about defense and coverages, and things that I feel like work, that he feels like work; and things like that. So, I'm excited about him. I'm excited about what he brings and how he can help our group.

"I'm just looking forward to, obviously, supporting him and getting this thing going."

Despite the headliners in the blockbuster trade between the Celtics and Oklahoma City Thunder being Horford and Kemba Walker, one other player coming to Boston in the deal should not be overlooked.
When it comes to 21-year old Moses Brown, he received high praise from the 35-year old Horford -- who was impressed after a season together in OKC.

"As far as Moses, man, he's a great kid," Horford said. "Guys are going to love him in the locker room. He listens. He's all about the team. He's trying to play the right way.
"I really just tried to help him in the short time that I was with him in OKC any way that I could. Defensively – with the with the big guys I'm usually harping a lot on defense. Those are some of the things that I was talking to him about. He's somebody that also has a lot of potential as well. But he’s going to be grateful for the locker room. He's a really good guy."

Moses at 7-foot-2 averaged 8.6 points and 8.9 rebounds in his second NBA season, mostly filling in for Horford through the last 43 games.
One of Brown's more notable performances came against the Celtics back on March 27, when the young prospect scored 21 points and grabbed 23 rebounds in 33 minutes of action.
If Horford, who is a five-time All-Star with All-Defense and All-NBA pedigree, has provided an accurate scouting report on Brown and already has a pretty great relationship with coach Udoka, the Celtics and Brad Stevens are off to a great start in the hopes of bouncing back from a mediocre 2020-21 season.