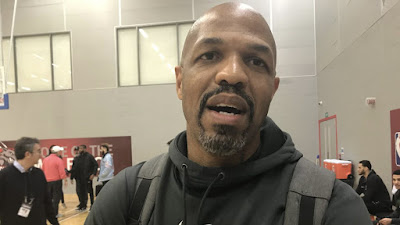 Celtics assistant coach Jerome Allen has interviewed to possibly replace Brad Stevens and is expected to interview with the Portland Trail Blazers for their open head coaching job, according to Boston Globe's Gary Washburn.
Allen joined the Celtics coaching staff back in 2015 after playing professionally for 14 years in the NBA and overseas. Allen has "been a positive influence, forging close relationships with the players" during his six seasons in Boston, per Washburn's report.
Celtics assistant coaches Jay Larranaga and Scott Morrison are also expected to interview for the vacancy. While Larranaga has been with the team since 2012, Morrison has been on the C's staff since 2017. Morrison was the head coach of the Maine Red Claws previously for three years and won D-League Coach of the Year in 2015.
Stevens became the Celtics president of basketball operations once Danny Ainge stepped down last week, and the search for a new head coach began internally before looking at external candidates.
The Trail Blazers became the second team to have a head coaching job available following the team and Terry Stotts agreeing to part ways Friday. Blazers superstar guard Damian Lillard has reportedly already requested for Los Angeles Lakers assistant coach Jason Kidd or Clippers assistant Chauncey Billups to be hired. Both Kidd and Billups are also rumored to be candidates for the Celtics as well.
In addition to internal candidates plus Kidd and Billups, Duke women's basketball head coach and ex-Celtics assistant coach Kara Lawson, 76ers assistant coach Sam Cassell, and Nets assistant coach Ime Udoka are just a few other names that have been rumored to be hired as Stevens' replacement.
The Orlando Magic are now the third team in search of a new head coach after agreeing to part ways with Steve Clifford. The ex-Magic coach and Kemba Walker were together for five seasons in Charlotte.