Danny Ainge was 'relieved' to officially step down, have Brad Stevens take over new role 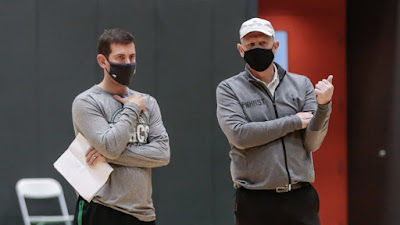 Danny Ainge apparently knew for months he was going to step down as the Celtics president of basketball operations.
Despite the 2020-21 campaign being one of the more difficult seasons for Ainge, as the Celtics were eliminated from the first round of the playoffs Tuesday night, he was "relieved" once things could officially be announced.

"The only people that really knew were my family and the people in the organization that needed to know," Ainge said on Toucher & Rich Thursday morning. "But anyway, I woke up refreshed today and glad that I'm moving on to something different."

Following the loss to Nets in Game 5, Ainge told some of the Celtics players about the news of him stepping away and Brad Stevens being his successor.

"They were just caught off-guard," Ainge said. "They were just surprised that any of this was happening. We just talked through it. They'll be fine."

Ainge says this shake up was in the plans way before he eventually had his sit down with Celtics owners Wyc Grousbeck and Steve Pagliuca around the time of the trade deadline.

According to Ainge, Stevens was told about a week later while ownership quietly worked on a succession plan. Wyc Grousbeck approached Stevens himself about the subject of replacing Ainge.

"I think Wyc just has a trust of Brad — an understanding of how smart and hard-working he is, how much he knows about basketball. I think that excited Wyc that Brad could be that president of basketball operations," he explained.

Ainge did deny the notion that the Celtics considered moving on from Stevens altogether, saying: "If Wyc didn't want Brad as president, Brad would be our coach still for as long as he wanted to be coach."
While Ainge will assist for how ever long it takes in the transition of Stevens into the role of president of basketball operations, he also made it clear that he doesn't plan on butting in while the search for the next coach of the Celtics gets underway or "hover" once his services are no longer needed.

"The way he is, he wants to be great at whatever he does. And I don't think it's a coincidence that you’re talking about a guy that has jumped to the head of the class in NCAA basketball, has taken a very young team with injuries to the conference finals three years…I don’t think those are coincidences with Brad. I think Brad — he's very, very underrated.

"This year has been a bad year, and we all know that. It's just not because of Brad. That's the biggest thing. People are always looking for a scapegoat. I don't think it's necessarily anybody's fault, it's everybody's fault…We're talking about a guy who knows what he's doing."
"I think he's a star, I really do. I think he's a star in the making, and I think he's going to do a fantastic job. I'm excited for him."

Ainge steps down after 18 seasons, while Stevens will head into the front office after coaching on the sidelines the last eight years. The Celtics finished as the No. 7 seed in the Eastern Conference with a 36-36 record this season.