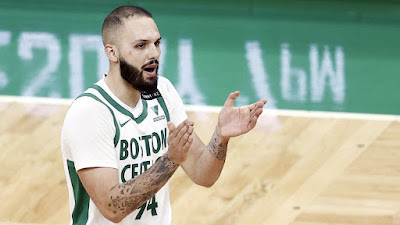 When the Celtics acquired Evan Fournier at the NBA trade deadline, it was understood that the 28-year old veteran would be in Boston long-term.
After losing Gordon Hayward in free agency last year, Fournier was the "shooter with size" that Danny Ainge was very much seeking.
Despite the nine-year wing owning a career average of 37.9% from 3-point range, Fournier struggled in the first few games with his new teammates before having a bout with COVID. But upon his return, he was able to find his shooting touch, hitting 46.3% of his 3's. Fournier started the last 15 games of the season -- including playoffs, while averaging 18.0 points in 12 of those contests.
However, since the Celtics' elimination from the first round at the hands of the Brooklyn Nets, Ainge retried and Brad Stevens stepped down as coach to take over as the new president of basketball operations. Now with Stevens calling the shots, is re-signing Fournier a priority or will he move on from the veteran that Ainge was so quite fond of?
While rumors have been swirling over the past week about the Celtics and Kemba Walker wanting to part ways, only to have a report deny those claims, it would actually benefit Boston cap-wise to move on from the former All-Star guard's contract if the plan is to bring back Fournier.
With $132 million already on the books for next season's payroll, it's likely the Celtics won't sign a free agent this off-season unless it's internally. According to Zack Buckley of Bleacher Report, he predicts Fournier will be back whether Walker is moved or not.

"That could mean Boston's biggest investments are made in-house. Evan Fournier, acquired from the Orlando Magic at the trade deadline, might be a top priority to re-sign," Buckley wrote. "Once he was healthy enough to contribute, Fournier showed the impact he can make as a complementary scorer, shooter and playmaker. Even if the Celtics are confident [Kemba] Walker can get back to his old form -- and that's an enormous if -- they need support pieces on offense. That's why they got Fournier in the first place, and why they'll likely bite the bullet to bring him back."

So what will Fournier command in terms of market value as a free agent? That depends, especially since the Celtics own his "Bird-rights" and technically could offer the most in any potential deal.

"He's going to look for $15-20 million a year," an NBA executive recently told Michael Scotto of Hoops Hype. "I'm not sure where he gets that from. They'll have to keep him since they can't replace him. It'll be interesting because they have never been willing to pay the tax, so getting around that will be hard for them. If they let him walk, there's no replacement."

Fournier essentially stepped in for Jaylen Brown, once the All-Star underwent season-ending surgery on his wrist in the last week of the 2020-21 campaign. The former Magic guard clearly showed his versatility -- making an impact as a scorer, 3-point shooter and playmaker. Stevens has a decision to make and it may not be an obvious one as some have made it out to be.