How Al Horford, Robert Williams can make each other better 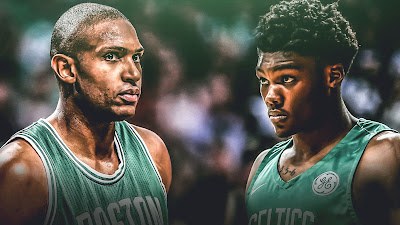 Brad Stevens made a huge splash when he acquired Al Horford for Kemba Walker as his first major move as the Celtics new president of basketball operations last week.
The blockbuster trade not only created some financial flexibility but also brought in a veteran voice that already gets along with All-Stars Jayson Tatum and Jaylen Brown.

"It was something that we needed to move on," Stevens told reporters via Zoom on Monday in his first comments since the deal was made.

The Celtics rising stars aren't the only ones that are more than likely looking forward to the return of Horford. Robert Williams, who was just a rookie during "Big Al" last season in Boston, has made strides and has become an NBA starting center since.
It was prior to the beginning of the 2020-21 campaign that Williams credited Horford as being instrumental in his growth as a rim protector and appreciated his mentor's support even after he left for Philly.
The dynamic may now be interesting the second time around between Horford -- 14.2 points, 6.7 rebounds, 3.6 assists and Williams -- 8.0 points, 6.9 rebounds, especially after both are coming off much improved seasons.

"Al can move the needle," Stevens said. "Al had a good year in Oklahoma City. Obviously didn't play a ton of games … but statistically had a year that obviously applies across the board."

Horford playing only 28 games had more to do with draft positioning for OKC rather than any sort of injuries for the 35-year old.
While Stevens is still searching for a new head coach, there might be a logjam when you look at the frontcourt depth of Horford, Williams, Tristan Thompson, newcomer Moses Brown (part of the Walker trade) and even the undersized Grant Williams (in small-ball lineups).

"For instance, Tristan's ability to switch and Tristan's ability to rebound allows him to play with a spacer like Al, who also has a lot of flexibility," Stevens said. "Rob's ability to play in the dunker and hitting Al in the seams and playing with the lob game gives you flexibility. Those are things we'll have to figure out. That won't be as much my decision once those times come, once the roster is set. Then I'll be out of that. Then whoever the coach is can figure out how they want to utilize everybody."

Last season the two-big lineup of Thompson and Daniel Theis wasn't always the greatest for Stevens. However, when it comes to Horford, who's a better shooter than Theis, and Robert Williams paring up, that frontcourt duo could create havoc for opponents on both ends of the floor.
With Williams eligible for a rookie contract extension this off-season and Thompson on an expiring deal for next year, either one could end up be moved.
Still, Stevens remains optimistic about Horford and Williams helping each other out if they are teammates once training camp begins.

"Rob is a guy that really wants to be good," Stevens said. "He is a listener -- he wants to improve. He'll lean on every word Al says, obviously, and they can make each other better.
"With those guys and Tristan and Moses, and we still have Tacko [Fall] on his contract -- we have a lot of decisions to make but also a lot of flexibility. You're talking about some really good players at that position. We'll see how it all shakes itself out."