Ime Udoka on Jayson Tatum, Jaylen Brown: 'They're going to allow me to coach them' 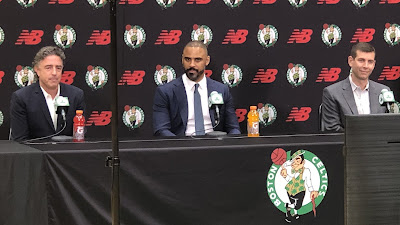 The Celtics officially introduced Ime Udoka as their new head coach on Monday in a press conference with the Boston media.
Udoka was asked several questions about his relationship with All-Stars Jayson Tatum and Jaylen Brown, since he coached them and Marcus Smart as an assistant in the 2019 FIBA World Cup with Team USA. He was very appreciative by their kind words.

"They're going to allow me to coach them, push them. They know I'm going to be on their ass, and that's what they like about me, they've asked me about that," Udoka said. "They want to be pushed, they want to be directed towards winning, and you expect that from your stars. The character they've shown. They all have different personality traits. Marcus is one way, Jaylen is one way and Jayson is as well.

"But bottom line, they want to win and help us get No. 18. That part was attractive."

Brad Stevens mentioned that he spoke with many candidates, some of whom were reported on and "many others that weren't."

"I go back to that he has a great basketball acumen, a great understanding, but that's to me something a lot of people have," said the new Celtics of basketball operations. "It's his authenticity, his ability to be tough and yet very warm, and it's his experience."

"It's been a great journey to get to know him, way better than I knew him as the guy that was yelling out our play calls in the Philly and Brooklyn series the last two years," Stevens added.

Udoka takes over a fairly young roster that disappointed last season after finishing 36-36 as the seventh seed in the Eastern Conference. Still, Udoka spoke about his ability to connect with younger players, a strength that was pointed out to him by Hall-of-Fame point guard Isiah Thomas -- who was the first to bring up his potential as coach.

"He said you connect with the young guys," Udoka said. "You're not a 25-point scorer but they relate to you well, and you push them in the right way."

It was soon after that when Udoka got his first taste of coaching on Gregg Popovich's staff in San Antonio.

"Talking to Kawhi Leonard as a young guy, I used to tell him, 'Why wait? What are you waiting for? These guys, don't give them too much respect,'" Udoka said. "And I'd say the same thing to Jayson and Jaylen. The sky's the limit. The fact that you're not All-NBA, that should be a chip on your shoulder. You should play with that edge, and want to prove people wrong.

"But my message to them would be, 'Why wait?' The talent is there. The work ethic is there. It's a chance to be a better leader, more vocal at times, but don't wait for anything. Go out and take it now."

While the ultimate goal for the organization's 18th coach is to win an 18th championship, getting Brown and Tatum to reach another level would be a huge step in that direction.

"What I keep going back to is the talent," Udoka said. "When you have two young pillars at that age, the sky is the limit. That's what it starts with. You're only as good as your players, and where you push them to get to."