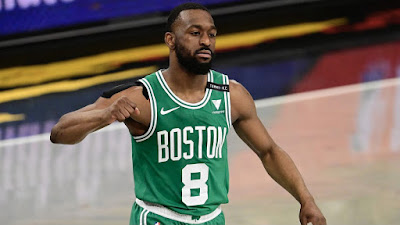 It may appear that the Kemba Walker era in Boston is coming to an end, as the Celtics and point guard are likely to part ways this summer, per sources.
According to Farbod Esnaashari of Bleacher Report, while the C's plan to retain Jayson Tatum and Jaylen Brown, Walker will be included in a potential roster shakeup and the feeling is mutual between both parties on moving forward from one another.
The young Celtics core, who were just two games away from an NBA Finals berth last September, are without a coach once Brad Stevens became the team's new president of basketball operations in former after Danny Ainge stepped down last week -- all within 12 hours removed from a first-round exit against the Brooklyn Nets.
Despite Walker being an All-Star in his first season with the Celtics and had a hand in helping the team reach  Game 6 of the Eastern Conference Finals, Ainge was ready to move on from Walker, especially after knee issues became a concern.
It's no secret that Ainge tried to trade Walker to New Orleans for Jrue Holiday last offseason, but the deal fell through and Holiday ended up in Milwaukee instead.
Per Esnaashari's report, a source close to Walker said he was hurt by Ainge's attempt to move him, and the relationship between the two has since soured. Though Walker got along with his teammates and felt like he was a veteran presence in the locker and a mentor to both upcoming stars in Tatum and Brown -- he now no longer feels wanted.
Walker becomes the latest example of an All-Star guard not being able to trust Ainge and or the Celtics front office as Stevens takes over and will be the one calling the shots now.
While no team this season had been affected more by COVID-19 health and safety protocols -- losing 131 player-days -- than the Celtics, Walker missed 29 games due to left knee management and the last two playoff outings against the Nets.
Even when Walker had his moments during the 2020-21 campaign, it was clear with the emergence of both Tatum and Brown, the trio just had a hard time gelling on both ends of the floor.
Walker is set to earn $36 million next year and has a player option worth $37.7 million for the 2022-23 season, making it sort of difficult to move his contract. The Athletic reports that due to that last two somewhat injury plagued seasons, Walker's trade value has taken a major hit.

"Multiple front-office sources across the NBA told The Athletic [last] week they still view Walker as having negative trade value should the team decide to go that route this offseason. That likely means a trade would cost the Celtics extra picks or assets to offload, even if Walker is universally admired for his relentlessly positive attitude and hard work through injury."

Wherever Walker lands is anyone's guess, but the disgruntled Celtics guard would prefer a winning situation such as the Knicks or possibly the Mavericks and not necessarily a championship contender.
Keep in mind Walker's final destination could also depend on what happens to veteran free agent guards like Kyle Lowry, Dennis Schroder or Mike Conley come this August. Teams with cap space could just sign one of those capable starting guards versus giving up valuable assets for someone like Walker, who many around the league have already labeled as "damage goods."