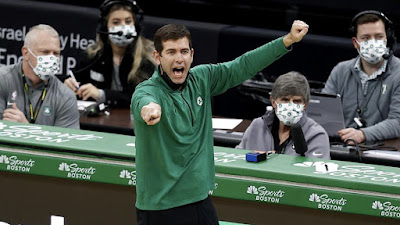 Former Celtics head coach Brad Stevens will transition into his new role as the team's president of basketball operations after Danny Ainge stepped down Wednesday morning.
Owners Wyc Grousbeck and Steve Paglicua held a press conference less than 24 hours after the Celtics were eliminated by the Brooklyn Nets in Game 5 Tuesday night, to announce that Stevens would be named as the predecessor to Ainge -- who officially retired after 18 seasons in the team's front office.
While that means that a search for a new head coach has immediately gotten underway, the Celtics will still have Ainge assist in offseason duties as Stevens adjusts to the new job.

"Helping guide this organization has been the thrill of a lifetime, and having worked side-by-side with him since he's been here, I know we couldn't be in better hands than with Brad guiding the team going forward," said Ainge to reporters via Zoom. "I'm grateful to ownership, all of my Celtics colleagues, and the best fans in basketball for being part of the journey."

"I'm excited for Brad," Ainge added. "He was born for this."

Grousbeck thanked Ainge, saying "Danny has made all the difference over the past 18 years – our record of winning percentage and playoff victories is near the top of the league during that time," he also expressed excitement for the direction they're heading in with Stevens taking over as president of basketball operations.

"Turning to Brad is a natural next step, since we have built a partnership over the past eight years, and he is a special basketball mind. We want him to lead us into the next great era of Celtics basketball."

Stevens, 44, who has been the Celtics coach over the past eight years, welcomes the opportunity to be in the front office and understands all that comes with the role.

"I'm grateful to ownership and to Danny for trusting me with this opportunity. I'm excited to tackle this new role, starting with a wide ranging and comprehensive search for our next head coach. I love the Celtics, and know the great honor and responsibility that comes with this job. I will give it everything I have to help us be in position to consistently compete for championships."

Grousbeck, who hired Stevens back in 2013, told reporters Wednesday afternoon that he and Stevens have agreed "to win banner 18 or die trying."

After a 36-36 disappointing season and a first round exit for the Celtics, it will be a challenge for Stevens to navigate the ship this summer with many questions left unanswered.
Kemba Walker, the team's highest-paid player, has two years and $73 million left on his current deal. The former All-Star is coming off a season where he played 43 out of 72 games -- missing the Celtics final two playoff games -- with knee issues.
Marcus Smart is entering the final year of his contract and is extension-eligible, while Evan Fournier will be an unrestricted free agent after being acquired at the trade deadline with a good amount of the trade exception used -- which was created when Gordon Hayward departed in free agency last offseason.