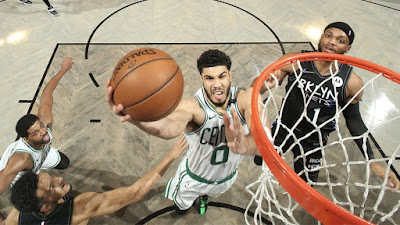 On the brink of elimination, the Brooklyn Nets' Big-3 proved to be too much for the Celtics to overcome.
With Kemba Walker and Robert Williams unavailable, the C's would need to play their best basketball if they had any chance of extending the series.
Jayson Tatum carried the load offensively, but James Harden's triple double put away any hope of Boston forcing a Game 6.

"In these past two weeks, the team came together and fought . I think that is what represents — people that are going to fight no matter what, and that's what we did this series. We fought, and I think we earned some respect around this league," said Tristan Thompson during his postgame presser.

Looking back at the series, Marcus Smart summed it up perfectly—the Celtics were simply outmatched and competed with what they had.

"You can only do so much with what you've got," said Smart.

Kyrie Irving dropped 25 points while Kevin Durant scored 24 points on 8-of-16 shooting in Brooklyn's 126-109 victory Tuesday night. Despite their elimination from the playoffs, Marcus Smart is still proud of the effort they put forth against one of the best teams in the league.

"I'm proud of the way these guys fought. I'm proud of the attitude. We could easily have just said, let's go home. But we continued to come out here and fight. Odds weren't in our favor. You have to live with it. It’s part of it. You move on, come back stronger," said Smart in his postgame comments.

Tatum ended the season on a high note, scoring 32 points, knocking down 12 of his 27 attempts.
Logging a season high 34 minutes, Romeo Langford chipped in a career-high 17 points, shooting 7-of-12 from the field. Struggling from the field, Smart (5-of-17) finished with 14 points. Jabari Parker also tallied 13 points for Boston off the bench.
Boston got some early scoring from Langford (5 points) and Tatum (7 points), but Harden stole the show in the first quarter, leading with 11 points, four rebounds, and dishing four assists.
Making only three of their 16 attempts from deep, Brooklyn jumped out to a quick seven-point lead in the opening quarter. Their hot start continued as Harden's 18 point half paired with Irving's 15 points put Boston in a hole. However, the Celtics wouldn't go away and only trailed Brooklyn by eight, despite an inefficient offensive performance after the first two quarters.
Boston kept the quarter competitive, preventing the Nets from taking complete control early. The Celtics got surprise production from Parker and Langford, which kept Boston in the game with Smart's shooting struggles.
Tatum and Parker led the team in scoring with 11 points each, but the Celtics' 36% shooting and Brooklyn's 49% shooting from the field told the story of the first half.
In need of some scoring, Boston relied on Tatum, who scored nine points in the third quarter. Langford also contributed, increasing his scoring total to 13 after the third quarter. Without their third leading scorer, the Celtics would need to rely on Tatum’s scoring more in the fourth quarter if they had any chance of keeping their season alive.
While Tatum did his part adding another 12 points to his total in the fourth quarter, the Celtics couldn't do much to keep up with the Nets' superstars. Harden and Irving continued to dominate offensively, and pulled away in the fourth putting an end to the Celtics' lackluster season.
With their team struggling all year with injuries and COVID, Brad Stevens saw a bright spot in the Celtics' season, as he was happy to see his franchise player perform at a high level throughout the season into the playoffs despite dealing with constant adversity.

After a season filled with disappointment and agony for many Celtics fans, Boston can turn its attention to the offseason — which features plenty of uncertainty. Fournier is a pending free-agent, and considering their struggles as a unit this year, there's a good chance Boston will be busy shaking up their roster.
Whether or not the Celtics improve their team enough to push them back into contention, Boston has something encouraging to look forward to next season — Jayson Tatum, who is determined to establish himself and build off his strong year.

"My goal is the same as it's always been. What drives me to excel. To be one of the best. To be a winner. That's what drives me. Not what outside people say," said Tatum in his Zoom press conference.


Game Notes:
The Celtics made 43.5% of their shots, while Brooklyn knocked down 51% of the field goals. The Nets finished with four more 3-pointers than the Celtics, but were outrebounded 44-39.
The Nets scored more points in the paint (52-50), and committed three less turnovers than the Celtics. Boston finished with only 18 assists, while Brooklyn had 26 dimes.
Ian Carrano
Follow @IC_Sports1