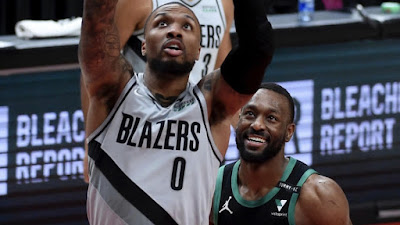 The Celtics and Kemba Walker have mutually agreed to part ways this summer, per Farbod Esnaashari of Bleacher Report.
While rumors have already begun on where Walker could end up, there are also trade proposals emerging that include assets of young talent and or draft picks to sweeten any potential deal that not many can offer.
According to Esnaashari, sources say Walker is seeking to be moved to a winning situation which does not necessarily mean a championship contender. With the Celtics being in a "good position" to reportedly pursue a trade for another All-Star, lets take a look at some possible options for new president of basketball operations Brad Stevens to consider.
Damian Lillard -
The Portland Trail Blazers' superstar guard has been linked to trade rumors since the moment he got knocked out of the playoffs to the Denver Nuggets 4-1 in the first round. In nine seasons, Lillard has been to the Western Conference Finals only once and that was two years ago.
Despite the Blazers and coach Terry Stotts coming to an agreement to move on from each other, it doesn't guarantee Lillard will be in the team's future plans, especially after the franchise player publicly asked for reported Celtics coaching candidate in Jason Kidd to be hired to fill the vacancy, only to have the Hall-of-Fame guard withdraw from consideration all together.
Greg Swartz of Bleacher Report believes, "Few teams have the kind of draft picks and young talent to make a serious run at Lillard, if he eventually asks Portland for a trade. The Celtics are one."
With that said, one would think any conversation between Boston and Portland for the six-time All-Star has to begin with Jaylen Brown, who's coming off a career year. But Swartz has come up with a trade proposal that would form a new Celtics big-three with Jayson Tatum and Brown.

"Putting Lillard together with Jayson Tatum, Jaylen Brown, Marcus Smart, Tristan Thompson and company puts Boston back towards the top of the East, with a squad that can suddenly go toe-to-toe with the Brooklyn Nets, Philadelphia 76ers and Milwaukee Bucks," Swartz wrote.

Other than Walker, 23-year old big man Robert Williams -- who became a starter and was coming into his own before a late season toe injury and ankle sprain kept him in and out of the lineup, would be part of a potential five-player swap that also incudes several draft picks.
Here's what Swartz's proposal would look like:
Boston Celtics Receive:
Portland Trail Blazers Receive:
Lillard turns 31 next month and is going into his first season of a four-year contract extension that he signed back in 2019. The Celtics would roughly be looking at an average base salary of $48.9 million per season through the 2024-25 campaign (the last being a player option worth $54.2 million). So the question remains would it be worth it to pair a bonafide stud, especially in the playoffs with Tatum and Brown, while giving up the future in Williams, Nesmith and Langford?
Kristaps Porzingis -
After a second straight first round exit for the Dallas Mavericks with the All-Star duo of Luka Doncic and Porzingis leading the way, it appears that the roster as currently constructed may need more offense and another playmaker, especially in the fourth quarter.
Porzingis may not be happy with his role and the diminished amounts of touches throughout the series with the Los Angeles Clippers that went the full seven games.
Still, this option for the Celtics is a simpler one, as it would be a straight swap of Walker for Porzingis, plus a first rounder. Maybe a fresh start and change of scenery would help both former All-Star caliber players after the last two seasons of battling injuries.
However, this trade would give the Mavericks one less year with Walker, while Porzingis is owed $31.7 million and $33.8 million over the next two seasons, plus a $36 million player option for 2023-24.
But if Porzingis feels frustrated with being Doncic's sidekick, would the stretch big accept a third option role behind Tatum and Brown in Boston? Plus, who becomes your starting point guard if you're Stevens?
Al Horford -
Old friend Big Al returned to near All-Star form in Oklahoma City this season, despite being shut down following the trade deadline. Horford clearly didn't fit in Philly and surprisingly enough the 76ers were able to move the former Celtic and his massive contract.
While OKC was unable to find a suitable trade partner for Horford, Stevens could entice the Thunder to take Walker off his hands along with a couple of first-round draft picks as well. Though Oklahoma City is technically not a "winning situation" that Walker would prefer, the Celtics would welcome Horford back with open arms and his $27 million salary for next season (which about $9 million less than Walker's).
As for Horford's last year of his current deal; only $14.5 million of the $26.5 million is guaranteed for 2022-23, unless Boston wins a championship and then it would become fully guaranteed before that contract is off the books.
Once again, just as the Porzingis scenario, who'd be running the point for the Celtics and how much cap space will be available for any potential free agent guards on the market?
With Walker set to earn $36 million next season and a player option of $37.7 million the following year, Stevens will have to consider all options. Even the New York Knicks are a dark horse to come calling since Walker, a Bronx native, had the Knickerbockers as one of his top destinations back in the summer of 2019 before signing with the Celtics as a free agent.
The Knicks have $60 million in cap space and have a decision to make on soon-to-be unrestricted free agent Derrick Rose and or seek another scoring options to pair with their All-Star and the league's Most Improved Player in Julius Randle.
At this point Walker would welcome an exit from Boston after being shopped around at least twice over the past year. Per Chris Mannix of Sports Illustrated, Walker was nearly traded to the San Antonio Spurs for LaMarcus Aldridge's expiring contract back in March.

"The Celtics front office was looking for a way to get out from under that contract, and ultimately were not able to do that despite having conversations with multiple teams over the last several months," said Mannix during his appearance on NBC Sports Boston Wednesday night.

"I was told they discussed a deal involving Kemba Walker and LaMarcus Aldridge when Aldridge was still in San Antonio. Primarily because Aldridge was on the last year of his contract, whereas Kemba Walker has two years currently and about $76 million remaining on this contract... So for Kemba to hear his name and understand his name was in trade rumors, that absolutely has frustrated him over the last six to eight months."

It should be interesting what Stevens decides to do with Walker's contract as his first major move in his new role, as he tries to oblige the disgruntled point guard.