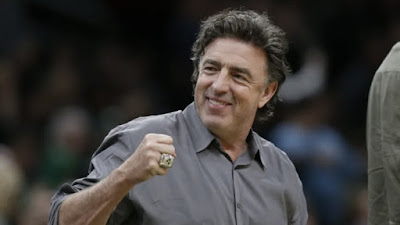 Celtics owner Wyc Grousbeck expects to see more roster changes and 'a very busy July' for new team president of basketball operations Brad Stevens and new head coach Ime Udoka.
Stevens traded Kemba Walker, a 2021 first-round draft pick and a future second-rounder to Oklahoma City for big men Al Horford, Moses Brown and a 2023 second round pick as his very first move.
Appearing on 98.5 The Sports Hub's Felger and Mazz Show, Grousbeck discussed a variety of topics, including how the Celtics could potentially look like before start of the 2021-22 season.

"The roster is not complete," Grousbeck said Tuesday afternoon. "There's a lot we have to go do. And there are a lot of potential trades, I would imagine -- just reading the wires and thinking a little bit and talking a little bit to Brad -- there's a lot of stuff that could happen this summer. I don't really know what the roster is going to look like in August. It's going to be a very busy July. We're not hard capped or anything like that, but we are going to have to be clever. If we're going to take money in, by cap rules we're going to have to send money out."

While Grousbeck isn't necessarily demanding a shakeup, but he wouldn't be surprised to see more changes whether via free agency and or trade for better results.

"I am prepared for it, let's put it that way," he said. "I just want to say very clearly, I'm not saying this roster in my view has to change because of X, Y or Z. I'm saying we have a new team president of basketball operations, we have a new head coach, they're going to spend July figuring out who they want to have and what the roster is going to look like and I'm going to be supportive, as is the rest of ownership. It's really in that order.

As Grousbeck noted, the Celtics don't have much room to sign free agents while a decision will have to be made on Evan Fournier (unrestricted free agent), who was acquired using a portion of the traded player exception from the Gordon Hayward sign-and-trade, and Robert Williams -- eligible for a rookie scale contract extension, along with Marcus Smart (final year of his current deal).
Though Grousbeck also stated that the Celtics "try very hard" to not talk about future contracts, he does acknowledge that there are some positions that need an upgrade, especially with the departure of Walker, but it also appears that the future will be centered around Jayson Tatum and Jaylen Brown.

"The important thing for keeping people around and for getting where we want to go is to take a long-term view," he answered. "The idea is we have two young All-Stars and [new Celtics head coach Ime Udoka] highlighted them in his press conference. ... He wants to be here in large part because of our roster, not to mention the fans and everything else it is about Boston.
"It's because of who's on the team right now and probably led by those two, Jayson and Jaylen. We'll see how this goes, but we're building for the future. We could have a good long run of being a good team with these young guys and now this new coach, so I'm really hopeful."

Asked if Tatum and Brown are untouchable, Grousbeck wouldn't go that far as to using that term, but did make it clear that he would like both All-Stars to finish their careers in Boston.

"It's not for me to say, and I don't comment on that stuff. I love them. We want them to retire as Celtics," Grousbeck said.

When it comes to the notion that race played a factor in the Celtics hiring of Udoka, Grousbeck gave an emphatic response.

"That's not how we hire; we just hired the best possible person that we could. And we're just going to leave that topic right where it is. Let's not insult Ime, the organization or me by suggesting it was anything other than hiring somebody that was a former player, and coached with top coaches on Team USA."
"I'm going to leave the answer at that," he added vigorously.