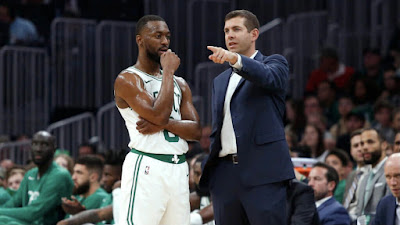 In his first media presser since trading Kemba Walker for Al Horford, Celtics new president of basketball operations Brad Stevens is clearly looking to turn things around as soon as possible.
After stepping down as head coach, Stevens' role is to build a roster that can get "into the mix at some point, hopefully in the very near future." After a disappointing 2020-21 campaign, he immediately pulled the trigger on the blockbuster trade as his first major move, despite there being some emotions attached to it, but it needed to be made.

"I just really liked Kemba," Stevens said via Zoom Monday. "Period, end of story. He is a super-likable person."

In order to create some financial flexibility, Stevens flipped Walker's remaining two-year contract worth about $73 million for Horford's current deal that will pay him roughly $53 million over the next two seasons instead. Stevens also included this year's No. 16 overall pick and a 2025 second-rounder in exchange for young big man prospect Moses Brown and a protected 2023 second round draft pick.

"We had to look at with the idea of moving that first-round pick this year, it gave us the opportunity to look at a road a head with a few more options, from the financial flexibility standpoint, with the picks, all of our future first-round picks past this year, which, again, give you more options," Stevens said. "And then it was the best deal that we thought with regard to returning players, right? The opportunity to add Al, who makes significantly less money but is a really good player who has corporate knowledge of this environment that's really excited to be back in Boston and has a good feel for not only playing with our guys but also has made them better."

Stevens believes the addition of Horford will help the Celtics' All-Star duo of Jayson Tatum and Jaylen Brown.

"The ability to space, pass, play in different ways and play in different coverages at the other end, and be able to play with other bigs or as the lone five I think is something that he just has a wealth of experience," Stevens said. "That played a role.
"Again, I think the first thing was it was really important to create a clear road ahead from the standpoint of financial flexibility. And then when you have the opportunity to bring back a player, person the caliber of Al Horford, whose really excited to be here, it was something that we needed to move on."

While how Stevens uses this new found financial flexibility remains to be seen, as the price to part with a player of Walker's impact on and off the court cost him a first round pick, something the Oklahoma City Thunder simply can't get enough of -- they now own three first rounders in this year's draft -- it seemed like a no brainer to get this done as quickly as possible.
So what is the next big move by Stevens? With a vacant head coaching spot still left to be filled, the Celtics president of basketball operations would not comment on the on going search out of respect for the candidates. But, he did mention that there are still roster needs that have to be addressed if they want to be a contender sooner rather than later.

"There's so many things that impact how a team functions together, and how well it plays together," Stevens said. "We obviously have a really good foundation, and have very talented young players. That's a good place to be, and then it's about finding the right fit.
"There are near-term decisions that can help you improve, and there are longer term decisions that you have to make with the idea of being in the mix. Ultimately, we want to be in the mix."