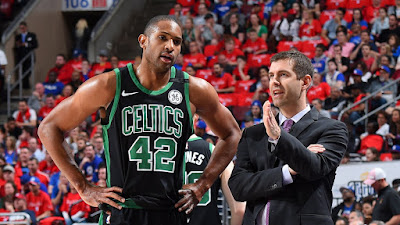 Brad Stevens swung for the fences in his first major move as the Celtics new president of basketball operations on Friday morning, dealing Kemba Walker to Oklahoma City in return for Al Horford.
The blockbuster trade seemed fitting for a roster that finished 36-36 last season and is currently without a coach. Walker, this year's No. 16 overall pick and a 2025 second-rounder are heading to the Thunder in exchange for old friend Horford, young big man Moses Brown and a second-round in the 2023 NBA draft; will go down as the official start of the GM Stevens era in Boston.
The deal ends Walker's time as a Celtic after just two seasons and while much of the past year was spent wondering if the four-time All-Star would ever fully recover from a left knee injury, Stevens had nothing but glaring things to say about the point guard on and off the court.

"From the very first day that Kemba arrived in Boston, he has handled himself like a true professional, a great teammate and a fierce competitor," Stevens said via a team press release. "I want to thank him for his tremendous impact and the positive contribution he's made to both the Celtics and the city of Boston."

Walker averaged 19.3 points, 3.8 rebounds, 5.4 assists in 99 games played for the Celtics. Despite playing only 43 out of 72 games this past season, he did have moments of putting up great offensive performances that were reminiscent of why was an All-Star starter only a year ago.
Stevens welcomes back veteran big man Horford, who played for the Celtics from 2016-2019.

"Al played a critical role both on and off the court during his time in Boston, and we're excited to welcome he and his family back to the Celtics," said Stevens. "His diverse skill set combined with his veteran experience and proven leadership make for a great addition."

After two season in Philadelphia and Oklahoma City, Horford looks to help the Celtics make it back to the Eastern Conference Finals as he did two out of the three years he was in Boston previously.
In three seasons with the Celtics "Big Al" averaged 13.5 points, 7.0 rebounds, 4.6 assists and 1.2 blocks per contest, while shooting 49.8% from the field and 38.2% from behind the 3-point arc.
The five-time All-Star is coming off a resurgence of sorts with the Thunder, averaging 14.2 points, 6.7 rebounds and 36.8% from 3-point range before being shut down for the team's final 28 games of the season.