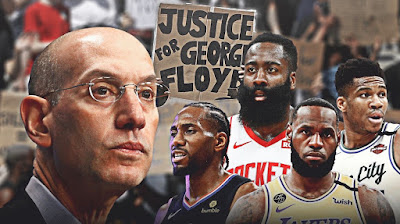 NBA commissioner Adam Silver sent a memo to the NBA office employees on Sunday night following protests around the United States over the weekend.

Silver offered thoughts of sadness, frustration and "sincere condolences to families and friends" of George Floyd, Ahmaud Arbery and Breonna Taylor, as he said the league shares in "the outrage."

Floyd, who is black, died on Monday after Derek Chauvin, a white police offer, kneeled on his neck for several minutes. Floyd's death has sparked protests in Minneapolis and in cities across the country. Chauvin was arrested Friday afternoon and charged with third-degree murder and second degree manslaughter.


"We are being reminded that there are wounds in our country that have never healed," Silver said. "Racism, police brutality and racial injustice remain part of everyday life in America and cannot be ignored."

Many NBA players took part in peaceful marches and protests around the U.S., as many traveled to do so. Celtics guard Jaylen Brown led a protest in Atlanta on Saturday after a 15-hour drive from Boston. He was joined by Pacers guard Malcolm Brogden and rapper Lil' Yachty.


On Sunday, Celtics players Marcus Smart, Enes Kanter and Vincent Poirier were among those who protested peacefully on the streets of Boston to the Massachusetts State House in the downtown area of the city.


"I am heartened by the many members of the NBA and WNBA family - players, coaches, legends, team owners and exacutives at all levels - speaking out to demand justice, urging peaceful protest and working for meaningful chance," Silver wrote. "Together, with our teams and players, we will continue our efforts."

Silver also added: "As an organization, we need to do everything in our power to make a meaningful difference."