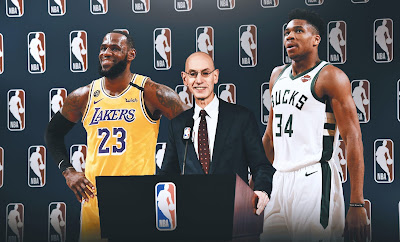 The NBA board of governors voted early Thursday afternoon and approved a 22-team format to restart the 2019-20 season on July 31 in Orlando, Florida.

ESPN's Adrian Wojnarowski, reported that the vote was 29-1 for the league to resume, with the Portland Trail Blazers voting against the final proposed plan.


Sources say the Trail Blazers chose to vote "No" because they believed that there was more competitive formats on the the table -- including odds of 2020 NBA Draft lottery being affected based on results of regular season games played in Orlando.

The National Basketball Players Association, who have been working with league officials on a plan to not cancel the season, will meet with the NBA board of governors via a conference call on Friday to approve the proposal.


"The Board's approval of the restart format is a necessary step toward resuming the NBA season," NBA commissioner Adam Silver said in a statement. "While the COVID-19 pandemic presents formidable challenges, we are hopeful of finishing the season in a safe and responsible manner based on strict protocols now being finalized with public health officials and medical experts. We also recognize that as we prepare to resume play, our society is reeling from recent tragedies of racial violence and injustice, and we will continue to work closely with our teams and players to use our collective resources and influence to address these issues in very real and concrete ways."

The plan will have a season window between July 31 - Oct. 12 (the last possible day for Game 7 of the NBA Finals) at Disney's ESPN World Wide Sports Complex, which would include 13 Western Conference teams and nine Eastern Conference teams, eight regular-season games, a possible play-in tournament for the eighth seed and the playoffs.


The top 16 teams in the Eastern and Western conferences will be joined by teams that are currently within six games of the eighth seed in each conference -- New Orleans, Portland, San Antonio, Sacramento, Phoenix and Washington.

Teams will begin training at their practice facilities at the beginning of July and advance to full training camps on July 9-11 at Walt Disney World Resort.

Other dates the league offered were the draft lottery on Aug. 25, the NBA draft is set for Oct. 15 and the 2020-21 season will likely tip-off on Dec. 1. According to sources, free agency could begin Oct. 18 with training camp starting Nov. 10, while teams were also told that the date for free-agency remains flexible.

League sources told ESPN's Bobby Marks that players will continue to see a 25-percent reduction in their paychecks on June 15, with the deductions to end by mid-September when the number of games lost have been "recouped."

The NBPA have detailed safety protocols during and outside competition before they approve the league's return-to-play plan. Players and coaches will be allowed to eat at outdoor restaurants, but will need to practice social distancing requirements.

The NBA will have daily testing for COVID-19 within the Disney campus and if a player tests positive for the virus, that player will be removed from the team to quarantine and treated individually -- and others team members will be tested immediately, while games will continue, sources told ESPN.

The league suspended their season back on March 11 -- due to the coronavirus pandemic.