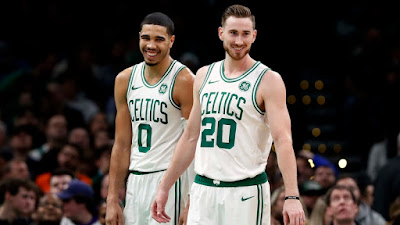 While the NBA has reopened most of their practice facilities prior to last week's league approval of a return-to-play plan, the Celtics have been taking advantage of the opportunity to put some shots up.

Such was the case on Monday when forwards Jayson Tatum, Gordon Hayward and rookie Romeo Langford were spotted having individual workouts at the team's Auerbach Center in preparations for the season to resume on July 31 at Disney World.

Tatum was seen firing away 3-pointers with Celtics assistant coach Jay Larranaga rebounding for the All-Star while wearing a mask and gloves.


As you wait for the NBA restart, here’s 47 seconds of Jayson Tatum making jumpers that the Celtics passed along from today’s workout (that also featured Gordon Hayward and Romeo Langford) pic.twitter.com/HZpVllkRif
— Chris Forsberg (@ChrisForsberg_) June 8, 2020


Hayward was doing light shooting and ball-handling drills with assistant coach Scott Morrison rebounding for him, while Brian Dolan of the team's medical staff supervised the practice session and also wearing a mask and gloves.


NBA teams still have not been cleared to return to full practices, but all 22-teams are expected to hold mini training camps in their market cities before heading to Orlando on July 9 for a full three-week training camp.