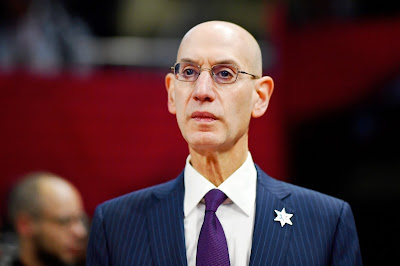 The NBA board of governors is planning to vote on Thursday, with league owners expected to approve commissioner Adam Silver's plan to restart the season in Orlando, Florida.

According to ESPN, the board of governors met with Silver via video on Friday afternoon about plans to bring at least 22 teams to Disney's World Wide Sports Complex in July to likely finish the regular season and compete for playoff berth in each conference.

The league needs three-fourths of NBA owners to approve this return-to-play plan and the majority of the owners are on board to make it happen, per insiders Adrian Wojnarowski and Romona Shelburne.


The NBA is planning a Thursday vote of the Board of Governors -- with an expectation that owners will approve Adam Silver’s recommendation on a format to re-start the season in Orlando, sources tell ESPN.
— Adrian Wojnarowski (@wojespn) May 29, 2020


"We are lining up behind him on this," one owner told ESPN following the meeting on Friday. "The posturing will end. Nothing is going to be perfect for everyone."

Silver has yet to choose one plan yet, as four ideas were presented during Friday's call, but NBA sources say bringing back all 30 teams is no longer a consideration.

The proposed 22-team plan would include franchises that were within six games of a playoff spot in both the Eastern and Western conference.

Under those guidelines teams like New Orleans, Phoenix, Portland, Sacramento, San Antonio and Washington (the only east team) would head to Orlando.

A 20-team proposal plan could be also considered, which only New Orleans, Portland, San Antonio and Sacramento would be included in that format.

Both scenarios were discussed, plus regular season games and a play-in tournament to determine who will make the playoffs.


Among the four plans discussed on the Board of Governors call today was one in which teams that are within six games of a playoff spot would be invited to compete in regular season games, then a play-in tourney for the final playoff spots, sources told ESPN.
— Ramona Shelburne (@ramonashelburne) May 29, 2020


The NBPA has stressed that it wants several tune up and regular season games before the start of the playoffs and players association director Michele Roberts wants Silver's plan to be put into action sooner rather than later.