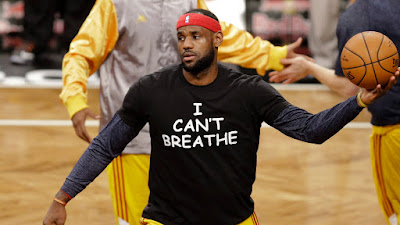 When the NBA eventually resumes its season at the Disney World "bubble" in Orlando next month, players will be able to customize their jerseys.

Shams Charania of The Athletic, reports that players can replace the last name on their jersey with a statement on social justice. The National Basketball Players Association has sent initial details to the NBA and Nike on how to implant the plan.


NBPA sent players initial details on the plan tonight, stating it is working with the league and Nike. NBA and the players union have been discussing various ways to allow players to express social justice issues in season restart. https://t.co/vw1RW2Z6Vj
— Shams Charania (@ShamsCharania) June 28, 2020


Earlier this month Kyrie Irving and Avery Bradley led a coalition of roughly 80-100 players during a conference call on systemic racism and how the return of the NBA season would impact social justice and the Black Lives Matter movement across the country.


"We're just trying to continue to shed light on the different social justice issues that guys around our league continue to talk about day in and day out," NBPA president Chris Paul told ESPN's Marc J. Spears. "People are saying that social justice will be off of everybody's mind in Orlando. With these jerseys, it doesn't go away."

Though coronavirus cases have spiked recently in the state of Florida and 16 out of the 302 NBA players have tested positive last week, Adam Silver and the league has come up with a 113-page health and safety protocol guideline to help keep everyone involved safe.


"Ultimately, whether it's fighting racism or a pandemic, we're coming back because sports matter in our society," Silver said on a conference call. "They bring people together when we need it the most and they can show how we can balance public health and economic necessity."

The NBA and NBPA approved the final terms of the restart plan on Friday and the league released its eight "seeding game" schedule, which will tip-off on July 30 after a near four-month hiatus that suspended play back on March 11.