If They Played In Today's NBA - Bill Russell 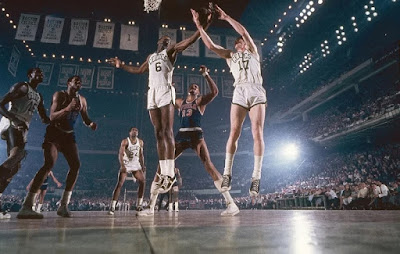 Former Celtics great Bill Russell walked around with a chip on his shoulder, as he also played basketball with that same attitude.

While Russell has mellowed over the years, the chip remains in place for anyone attempting to knock it off. Could he play - or even be a star these days?

Who am I to judge?

I lived down the street from Russell in Reading, Massachusetts during the 1960's and started following the NBA at the same time. Bill's second home in Reading was more upscale and private than his first residence on busy Main Street. A line of cedar trees all-but-shielded the Haverhill Street home from view. It was "Big Bill's" (as Johnny Most called him) play on the court that largely fueled my interest in the Boston Celtics, all the way to his final game, and triumph, when he led his team to its 11th championship on May 5, 1969 versus the Los Angeles Lakers.


"Bill Russell's skills don't show in the record book, they show in the scorebook. His is the most extraordinary history of achievement in all of athletics. No one in the whole fabric of athletics dominates his event the way Russell does."

Russell was supposedly measured at 6-foot-9.6 inches in bare feet and probably should have been listed at 6-foot-10. But he apparently didn't like that idea when a 1955 Sports Illustrated article mentioned that he was a "gangling 6-foot-9 and 5/8 of an inch," Russell responded with: 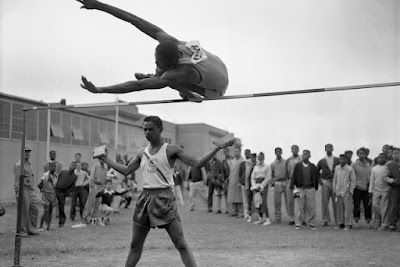 In the above photo, Russ is jumping over Johnny Mathis, legendary crooner and Bill's friend at USF. Russell was a superb high jumper and at 220 pounds he was lightning quick on the basketball court. He could grab a defensive rebound - throw an outlet before he landed - run the court - and be there for the offensive board, if needed.

Need you ask? Russell may be the greatest defensive NBA center of all time. He could handle the big brutes like Wilt Chamberlain on the interior and the quick, crafty guards like Jerry West on the perimeter. He could switch from his man to take on Oscar Robertson 25-feet from the hoop and switch back to his man in the paint without missing a beat. It is noteworthy that he only averaged 2.7 fouls per game in 42.3 minutes of play. He was a phenomenal defender.

It needs to be understood that Russell was never a volume scorer and he didn't need to be. He had the likes of Bob Cousy, Bill Sharman, Sam Jones, John Havlicek, Willie Naulls and Tom Heinsohn to do that. Admittedly, in today's game he would need more offensive moves under the hoop and at least a reliable mid-range shot, but I firmly believe he could have added those skills if needed. He only averaged 15.1 points.game for his career but passed off for 4.3 assists per contest.

We can add rebounding as another Russell specialty. he averaged 22.5 rebounds per game for his career, totaling more than 21,000 boards in that span. He took down 51 rebounds in a single game, and he grabbed 49 on two other occasions. Only Wilt Chamberlain competed with Russ as an all-time rebounder in NBA history.

All of the above traits don't mean a damn if a basketball player lacks the intelligence and savvy to lead a team to victory. Russell had both in spades, as he knew how to win, and he had a passion for winning. He led the Celtics to 11 championship titles and that speaks for itself.

"Big Bill" Russell could play - and star - in today's NBA. Size, supreme athleticism, smothering defense, uncanny rebounding, basketball IQ, quickness and the will to win were all there. Russ has never achieved the recognition he earned and deserved, in part due to his outspokenness on racism and his ongoing squabbles with the Boston media. This man revolutionized the game of basketball when a boost in popularity was badly needed. I doubt former-opponent, Jerry West, would argue against Russell replacing his likeness as the NBA's logo. I will conclude with some words from John Sapochetti of the Boston Herald:

"...If Red Sox great Ted Williams can have an entire tunnel named after him, and David Ortiz can have his own bridge and gate at our city's airport, why can't we do more for Bill Russell? Personally, I like the sound of Bill Russell International Airport."