Kendrick Perkins responds to Kevin Durant calling him a 'sell out' 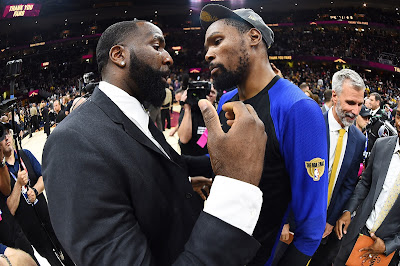 Kendrick Perkins has responded to Kevin Durant calling him a "sell out" on Insagram this week, following the former Celtics big man's opinion regarding Kyrie Irving wanting to boycott the NBA season.

Perkins says his disagreement with Irving's statement doesn't mean he's not fighting for the black community or standing behind the Black Lives Matter movement.


"KD, my brother. Just because I don't agree with what Kyrie got going on don't mean I'm not fighting the same fight that you all are fighting," Perkins said Friday on ESPN's First Take. "I am fighting for African Americans, I been have. And that don't make you a sellout, that don't make me a sellout because I have a different opinion or disagree with someone else that's going about it another way. I actually applaud anybody that's fighting the fight right now in America."

Durant, who also twitted a video of Perkins airballing a shot, called his former teammate a "sell out" in a Instagram post comment on Thursday. Perkins said Irving, one of Durant's best friends, was "causing unnecessary drama" among the NBA family -- while advocating players to oppose the restart of the 2019-20 season in Orlando.


"You don't know what I'm going through right now in my personal life fighting the fight. I live in a million-dollar community. I'm fighting the fight every day in my own community," Perkins said. "I'm the only African American family that live in this community, and my wife and I have to fight a fight with our home association and neighbors every day through email so much that we not even comfortable with having our kids go outside without supervision."

Perkins spoke about how he's used his ESPN platform and social media to shed a light on the country's social issues since the death of George Floyd. He also said he had a long conversation with Celtics president of basketball operations Danny Ainge in an effort to have the NBA speak up on racial injustice and police brutality.


"KD, for you to call your brother a sellout, man, ay, come on, dog," Perkins said. "You know my love is for you, you know what my love is and my heart is for you. ... By the way, this same sellout, this brother that's sitting right here on this ESPN platform talking to you today, I still love you to this day, my brother."