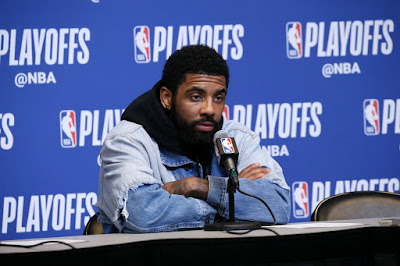 While many players have raised concerns about the NBA's return-to-play plan, apparently former Celtics All-Star point Kyrie Irving is leading the charge.

Irving, who is one of six National Basketball Players Association vice presidents, has reportedly been "a driving force" in bringing up issues regarding the league's restart plan, as he led a conference call of nearly 100 players on Friday night.

Shams Charania of The Athletic reports that Irving, along were several others are opposing the NBA's plan due to unrest over the "bubble" environment at Disney World in Orlando, Florida, the spread of COVID-19 and the current social climate around the country brought on by recent death of George Floyd.


"I don't support going into Orlando. I'm not with the systemic racism and the bullshit," Irving said on a call that included teammates Kevin Durant, Spencer Dinwiddie, Chris Paul, Carmelo Anthony, Donovan Mitchell, Dwight Howard, Joel Emibiid, C.J. McCollum, Kyle Lowry and Mike Conley. "Something smells a little fishy. Whether we want to admit it or not, we are targeted as black men every day we wake up."


Irving believes the NBA season will distract players from these protests and the Black Lives Matter movement surrounding Floyd and other recent deaths to play for the purpose of entertaining fans. Many players have participated in nationwide protests against police brutality and racial injustice -- including the Celtics' Jaylen Brown, Marcus Smart, Enes Kanter and Vincent Poirier.

Last week the NBA's board of governors and the NBPA approved Adam Silver's 22-team format plan to resume the season at Disney's ESPN World Wide Sports Complex at the end of July, but over the past few days players have voiced that they're hesitant about traveling to Orlando.

According to ESPN's Adrian Wojnarowski, Irving asked a series of questions a week ago when the NBPA voted 28-0 on the restart of the season during a conference call. His inquiries including if he could be one of the Nets' 35 allowed players and staff to join them in Orlando, would he be able to sit in the stands to cheer on his teammates and if he'd be able to also use the sauna to rehab his shoulder injury?

Now seven days later and Irving's new lists of concerns are mirrored by a good amount of his league colleagues after leading a 90-minute call on Friday about players potentially willing to sit out the season to feel united on a decision to take a stand on social issues facing the nation.

Irving, 28, has had a reputation throughout his career as a "disruptor," and it has emerged again at a critical moment for the NBA, which now still remains unclear on where the league stands on resuming the season after a plan was approved over a week ago. The Nets point guard has pitted himself against the likes of LeBron James again and other superstars, who are also on championship contenders and "Irving seems to be relishing the clash," per Wojnarowski.


"Once we start playing basketball again, the news will turn from systemic racism to who did what in the game last night. It's a crucial time for us to be able to play and blend that and impact what's happening in our communities," one widely respected NBA player told ESPN. "We are asking ourselves, 'Where and how can we make the biggest impact?' Mental health is part of the discussion too, and how we handle all of that in a bubble."

Another former Celtics guard Avery Bradley also agrees with Irving, as Charania reported that "(Bradley) was vocal throughout, urging players to take a stand and utilize this moment to 'play chess, not checkers.' "

Bradley, as 12-year veteran is a well-respected player around the league, despite being known as soft spoken while in Boston. But he, Irving and others are clearly vocalizing their many concerns, as the NBA looks to resume the season on way or another.