What Celtics remaining 2019-20 regular season schedule could look like 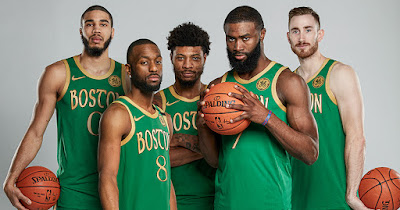 The Celtics and 21 NBA teams are heading to Disney World in Orlando, Florida, after the league approved a return-to-play plan on Thursday afternoon.

The league's board of governors voted on the 22-team format to restart the NBA season on July 31 at Disney's ESPN World Wide Sports Complex.

The Athletic's Shams Charania reported that beginning on June 15 players that are abroad will need to return to their team's market and all players will need to report by June 21, as testing for COVID-19 will commence the next day. Training camp will begin on June 30 and on July 7, teams will travel to Orlando.


With the the restart of the NBA season now just over a month away, the Celtics schedule won't start where it left off due to the selected teams invited to Orlando. League insider Tim Reynolds looked at what every team's schedule might possibly look like.


If the NBA goes with a plan of playing the next eight Disney/ESPN bound teams on your schedule - capping each team at 8 games - this is what the matchups for those 22 teams COULD look like:


The Celtics were supposed to face the league leading Milwaukee Bucks (53-12) the day after the league suspended its season, due to Rudy Gobert being the first NBA player to test positive for the coronavirus. Boston, who currently has the third best record in the East at 43-21, are three and a half games back of the Toronto Raptors (46-18) and three and a half ahead of the Miami Heat (41-24). The C's would have to play against all three of the aforementioned teams at least once during their eight games to wrap up the regular season.