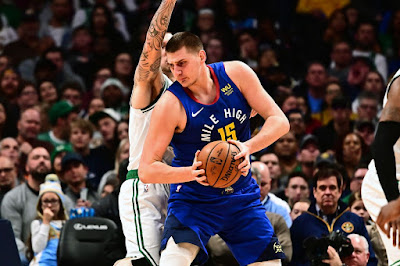 Denver Nuggets All-Star center Nikola Jokic tested positive for COVID-19 in Serbia and his return to the United States has been delayed, sources told ESPN.

Adrian Wojnarowski and Brain Windhorst reported on Tuesday afternoon that Jokic, who tested positive last week and has been asymptomatic, is expected to be cleared to travel to Denver and rejoin his team within a week.


Reporting with @WindhorstESPN: Nuggets star Nikola Jokic tested positive for the coronavirus in Serbia and his return to the U.S. is temporarily delayed. He’s been asymptomatic since testing positive last week. Jokic is expected to be cleared to travel to Denver within a week.
— Adrian Wojnarowski (@wojespn) June 23, 2020


According to NBA protocols, Jokic will need to test negative twice within a 24-hour period in Serbia before he can travel. When he arrives in Denver, he'll need to have a cardiac screening and test negative at least once for the coronavirus.

Jokic was averaging 20.2 points, 10.2 rebounds and 6.9 assists this season before reportedly losing 40 pounds during the league's hiatus.

He spent time with tennis star and fellow Serbian countryman Novak Djokovic at a recent event in Belgrade. Djokovic said on Tuesday that he has also tested positive for COVID-19.

The Nuggets, who have the third best record in the Western Conference at 43-22, have begun testing protocols this week at their practice facility ahead of traveling to Orlando on July 9 along with the rest of 21 teams to resume the season at Disney World.

Nuggets coach Michael Malone recently disclosed that he had tested positive for the coronavirus during the suspension of league play.