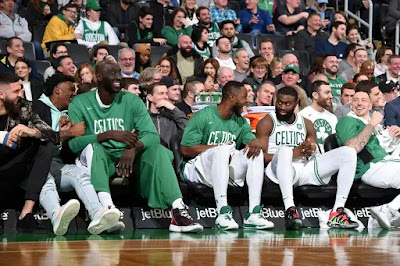 The 2019-20 season may still not have ended yet for Celtics rookies Tacko Fall and Tremont Waters under a new NBA loophole.

According to The Athletic's Shams Charania, the league will allow the 22-teams that are Orlando bound to carry up to 17-player rosters when the season resumes next month.

Playoff rosters typically are limited to a maximum of 15, as two-way players are ineligible for the postseason unless their contracts are converted to a standard NBA deal.


Sources: The NBA is planning to allow teams to bring up to 17 players per roster (including two-ways) into the resumed season. Previous estimate was 15-player limit.
— Shams Charania (@ShamsCharania) June 11, 2020


While ESPN reported last week that the league had discussed that two-way contracts would have a window between June 22 and July 1 for teams to convert those into NBA deals if they wanted under the original 15-player per roster format.

Under this new format two-way players would be allowed to travel to Orlando without having their contracts converted, per Charania, but it's not clear if they'd be eligible for the playoffs or just the eight remaining regular season games for seeding.

For the Celtics this means rookies Tacko Fall and Tremont Waters could still join the team when they head to Disney World's ESPN World Wide Sports Complex next month, despite the NBA G-League season coming to an erupt end.

Here's how the Celtics playoff roster could look like under the the new rule:

The Celtics could also decide to go the free agent route, signing possibly former All-Star Isaiah Thomas or maybe big man DeMarcus Cousins, which would fall under the original transaction window or replacement rule of adding a player that was signed in the NBA, G-League or on a training camp contract this season, per ESPN's Adrian Wojnaarowski and Bobby Marks.

Either way, imagine 7-foot-5 Fall, who was seen hitting 3-pointers at the Celtics' Auerbach Center earlier this week, heading to Disney to contribute during a possible deep playoff run?


The NBA approved a return-to-play plan last Thursday and have changed the target start date to July 30, as they're looking to limit the amount of players that enter the "bubble" and keep the COVID-19 pandemic out.

With many players that have concerns and may opt to stay at home or injuries that may occur, there could be plenty of opportunity for two-way players and free agents to also resume their season come the end of July.