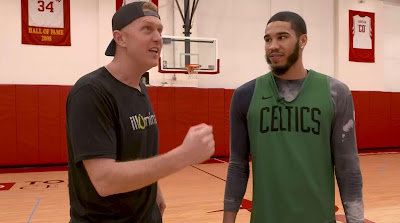 NBC Sports Boston's Brain Scalabrine was on WEEI Sports Radio Monday to discuss the return of the NBA season and the Celtics chances to go deep into the playoffs.

Scalabrine says the C's will represent the Eastern Conference in the NBA Finals and believes All-Star Jayson Tatum being a top-10 player in the league right now is the main reason why.


"I do like the Celtics to come out of the East," Scalabrine said on the Ordway, Merloni & Fauria afternoon-drive program. "I will tell you for a few reasons why. I think Brad (Stevens) is going to be remarkable in this environment. Think about it, a free throw happens, he can call his team over and get a really quick 15-second timeout to get guys on track. Remember, I am in a lot of the huddles, especially at home. He doesn't say much and he gets guys going in the right direction really quickly. Brad will have a big advantage because he's always making team adjustments as the game goes along. On the road it is a little tougher to do that because of the crowd. At home you can a little bit. I do like that.

"And I like what Jayson Tatum has become. Kemba Walker has never in his life been a second option. And that second option can go out there and give you 40. Jaylen Brown is ascending into a big-time two-way player. Jayson Tatum is for sure a top-10 player in the league. The only question is Daniel Theis, (Enes) Kanter, can those guys hold down the fort at that position against like an (Joel) Embiid over the course of a seven-game series, or Giannis (Antetokounmpo). That is the hole in the Celtics."

The NBA will reportedly resume on July 31 at Disney World in Orlando, Florida -- where 22-teams will play eight regular season games to decide playoff seeding.


Listen to Scalabrine's full interview below: