Enes Kanter raves about Jayson Tatum, says Daniel Theis has 'amazed' him most during Celtics workouts 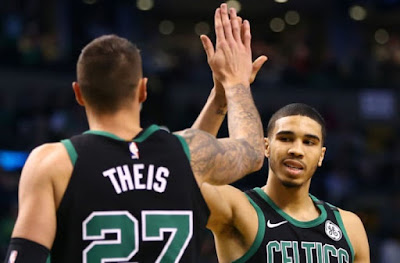 While the Celtics are slowly preparing for the restart of the 2019-20 season in Orlando next month, center Enes Kanter has offered a positive scouting report from the Auerbach Center so far.

Kanter noted that fellow teammate center Daniel Theis has "amazed" him most and All-Star Jayson Tatum has "lost nothing" when it comes to the Celtics' individual workouts -- that have been going on since the beginning of June.


"The last time I saw Theis, he was in good shape. He's in really good shape and, now, I saw Theis and I'm like, "Dude, what did you do?" He actually looks way better than when [the season paused in March]," said Kanter on The Enes Kanter Show podcast. "His body, his workouts — I've seen how he's moving. I was like, 'Dude this is crazy.' He looks in really good shape. That's the one guy that's really amazed me the most, definitely Theis."

After a report surfaced this past week that Tatum was seeking financed-insurance from the NBA, in the event an injury could hurt any potential future earnings since he'll be eligible to sign a maximum rookie extension this offseason, Kanter said the 22-year old is ready to pick up where he left off before the season was suspended.


"Jayson Tatum, it looks like he lost nothing. He didn't lose his touch, he's still making some crazy shots," said Kanter. "He's got that Trae Young haircut now. No, he's good, man. Having fun, getting better. He looks really good to me. I'm excited to see what he's going to do out there."

Though Kanter admitted to gaining 19 pounds during the season hiatus, he says he's lost nine of those already since returning to the Celtics practice facility, where he's been doing lots of conditioning work and shooting drills.