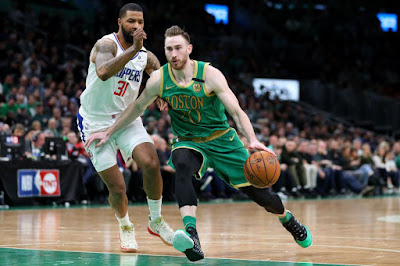 There won't be a long NBA offseason following the conclusion of the 2019-20 campaign, as Game 7 of the Finals could be as late as Oct. 13.

With the season expected to resume on July 30, there are deadlines to meet for some of the league's stars to opt-in to their 2020-21 player options. According to Shams Charania of The Athletic, Gordon Hayward is among those that has a certain date to inform their respective teams if they plan to opt-in to that the last year of their current deals.


Hayward has a player option worth $34.2 million on the final year of a four-year, $128 million contract and the Celtics forward has until Oct. 17 to opt-in, per Charania.

The 30-year old was putting up near All-Star type numbers and having his best year as a Celtic prior to the season being suspended, averaging 17.3 points (50.2 percent shooting), 6.5 rebounds and 4.1 assists in 45 games played.

While the COVID-19 pandemic could make free agency an uncertain one this offseason, especially for teams not spending the type of money they usually would, Hayward may decide to opt-in and not test the waters only days after the season would end.

Anthony Davis has a deadline much sooner than Hayward and has to decide if he wants opt-in to remain in Los Angeles or become a free agent, which would make him the top player on the market.