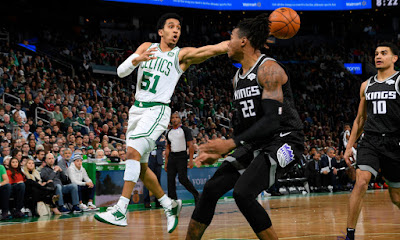 The Maine Red Claws announced Thursday that Celtics point guard Tremont Waters has been named the 2020 NBA's G-League Rookie of the Year.

The Celtics two-way player, who spent most of the season in Maine, averaged 18 points, 7.3 assists, 3.2 rebounds and 1.9 steals in 36 games for the Red Claws to win the award — that is voted by 28 of the G-League's 28 coaches and general managers.


"We are so happy for Tremont," said Celtics president of basketball operations Danny Ainge. "He had a fantastic G League season on both ends of the court, and continued to improve all the facets of his game while leading a winning team. This recognition is well-deserved."

Waters becomes the fourth Maine Red Claw player in franchise history to earn Rookie of the Year honors, joining Abdel Nader (2016-17), Tim Frazier (2014-15), and DeShawn Sims (2010-11). In February, he also was named to the Eastern Conference Midseason All-NBA G League team, which is the G-League's equivalent of an All-Star team.


While the G-League canceled the remainder of its season, due to the the coronavirus pandemic, NBA teams will now be allowed to bring 17 players when the season restarts in Orlando, which means Waters — and fellow two-way rookie Tacko Fall — could join the Celtic rosters, despite G-League players being typically ineligible.