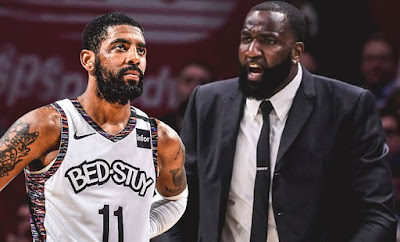 Kyrie Irving speaking out against the NBA's return-to-play plan has sparked plenty of conversation over the past few days on how the league will proceed.

On Friday the former Celtics guard reportedly led a conference call with nearly 100 players who have raised concerns about resuming the season could take away from the social unrest and protests around the country surrounding the Black Lives Matter movement and the recent death of George Floyd and several others.


"I don't support going into Orlando. I'm not with the systemic racism and the bullshit," Irving said, per Shams Charania of The Athletic. "Something smells a little fishy. Whether we want to admit it or not, we are targeted as black men every day we wake up."

Irving's former Cavaliers teammate and ex-Celtics big man Kendrick Perkins has voiced his opinion on the All-Star guard's statement during an interview on CBS Radio.


"He's not a powerful voice; he's a popular voice," Perkins said of Irving Monday on The DA Show. "There's a difference between being powerful and popular. Powerful, you're actually moving the needle. No one is listening to Kyrie. The NBA is going to continue. All he's doing is causing unnecessary drama between the NBA brothers that we don't need right now. Him lashing out is just making news and making a whole bunch of noise for nothing because the NBA season is going to happen. LeBron James wants to play. Chris Paul wants to play. Russell Westbrook wants to play. Anthony Davis, Giannis – when they first voted for the NBA to come back, the vote was 28-0. Everybody wants to play.

"Right now, all Kyrie is doing is just trying to throw a wrench in something, but he don't have the power to do so," Perkins continued. "When you're powerful, you actually move the needle. Kyrie is not moving the needle. All he’s doing is ruffling the feathers for no reason. The NBA is going to continue."

The NBA had it's 22-team plan to resume the season in place before players began to ask questions about the Disney World "bubble" in Orlando, there might be more details to iron out before games tip-off. But Perkins, like most want to know what changed for NBPA vice president Irving after his vote and now wanting players to boycott the restart?


I’m sooo damn confused when it comes down to Kyrie Irving....just 9 days ago he was saying this now all of sudden it’s something different?! Now he’s started unnecessary drama between the NBA brothers which is something we don’t need right now. https://t.co/Je1374Bh9a
— Kendrick Perkins (@KendrickPerkins) June 14, 2020


Perkins also points out how Irving has a reputation at times to want to be the center of attention and makes headlines for the wrong reasons, while thinking that's the best way to be a leader.


"It's crazy because he wanted to leave Cleveland and have his own team and he got tired of being under LeBron's shadow," Perkins said. "We saw how things worked out in Boston – not well at all. Then when he got to the Brooklyn Nets, we've seen some of the confrontations [and] problems he was causing there. Going to the media, saying we got to get better – and there's still 45 games left in the season. Guys going out there, playing their hearts out. Even if you do feel that way, you don't say that to the public. You just let it happen and you talk behind the scenes."

Though there was no one direct reason for the firing of former Nets' coach Kenny Atkinson, Irving may have indirectly been involved in that decision.


"Those types of things is unnecessary," Perkins added. "He's just known for bringing up drama all the time for no reason. Why are you stirring the pot? We don't need that right now. A lot of times, we don't need to hear his voice anyway. Kyrie is a helluva basketball player. Sometimes just because you’re the best basketball player don't make you the leader of the team. That's not how it works a lot of times."


Listen to Perkins' full interview below: