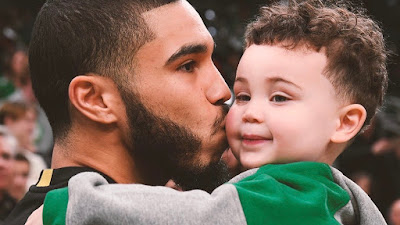 It's been over three months since Celtics All-Star Jayson Tatum has been seen walking the TD Garden halls with his son Deuce.

But on Sunday Tatum took to social media, as he wrote a heartfelt Father's Day letter to his two-year old baby boy.

I was asked to write you a letter for Father's Day, it is much tougher than I expected. You're just barely over 2 and there is so much I want to share with you but I'll keep it short. You have changed my life for the better and have shaped me into a better man as I hope to do the same with you as you grow older. I love you more than life itself, I can't wait to see you grow into the leader you were destined to be and create positive change in this world in your own way. And as you maneuver through it all know that I will always be there to guide you, encourage you, support you and know that you are never alone because I will ALWAYS have your back. That's all for now, love you son!


The NBA throughout the day have shown images of players hanging out with their children on Twitter to commemorate Father's Day.

Though it's been over 100 days that the season has been suspended, it's clear that players are taking full advantage of the time off to spend it with their families, as most prepare to travel to Orlando within the next few weeks.