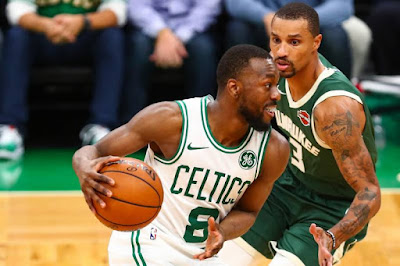 Basketball is officially back for the Celtics, as the NBA approved a 22-team return-to-play plan on Thursday afternoon.

While the format will tip-off on July 31 at Disney World in Orlando Florida, one league analyst predicts that the Celtics will represent the Eastern Conference in the Finals and not the Milwaukee Bucks, who had the best overall record when the NBA suspended its season on March 11.

ESPN's Jalen Rose spoke very highly of the Celtics and why he believes they'll win the East, during his appearance on Thursday's edition of "NBA Countdown."


"In a neutral situation, the way the season is about to be shotgun started again, I'm taking the Celtics in the East," Rose said. "I'm taking the Celtics in the East, because one of the great things about the Bucks – of course, their game does travel – but their home court was a huge advantage for them, a major advantage. If we're playing pickup ball, and the Celtics and Bucks players are in the gym, I'm going to pick Giannis Antetokounmpo, but the next four or five picks are going to be Celtics. That's my choice to come out of the East."

The Bucks led the NBA with a 53-12 record, which includes the best home record of 28-3. The Celtics own a 20-12 record at home and 43-21 overall for the third best home and overall record in the East.

Rose likes the Celtics chances because of how the roster is built and their style of play as reasons for a deep run in an unpredictable playoff setting.


"I'm loving teams like the Celtics and the Rockets," Rose said. "Small ball, spread it out and take advantage of the big guys that can't score against little guys. That's really what it's gonna be. It's gonna be like AAU out there. These dudes have been off for months, so if dudes like Russell Westbrook and James Harden can get hot – he's averaging 40 and then Russ? Boston's winning the East. The more I think about this — God, strike me down. I hadn't said this out of my mouth or even thought about it one time until we had this conversation, until right now. Boston's winning the East, and don't sleep on Houston in the West, but they’re not better than the Lakers or the Clippers."

The Celtics are the only team in the East that has three players averaging over 20 points per-game, including the rising star that is Jayson Tatum leading the way with 23.6 points per contest. Kemba Walker is a proven go-to scorer, especially in the fourth quarter, while Jaylen Brown is enjoying a breakout season and Gordon Hayward has shown stretches of his former All-Star level self. Coach Brad Stevens also has trust in his bench, going four-five guys deep on any given night

Boston has also beaten the league's elite teams including the Bucks, Lakers, Clippers, 76ers, Raptors, Nuggets and several other playoff teams at least once before the season shut down.

The NBA already had a potential of five or six teams that could make it to the Finals prior to the start of 2019-20 campaign. Now with this long layoff, its anyone's guess on which teams will make a surprise run and a few upsets are almost a certainty at this point.