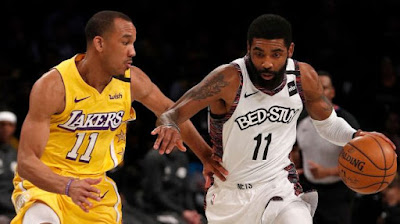 There is a growing group of NBA players that remain unsure if they are committing to the league's return-to-play plan at Disney World next month in Orlando, Florida.

Nets star Kyrie Irving and Lakers guard Avery Bradley are leading a coalition of players that want to voice their concerns surrounding the COVID-19 pandemic, social injustice and the restrictive bubble environment, as they oppose the restart of the NBA season.

On Monday, ESPN reported that Irving and Bradley further elaborated on their original statements, explaining their reasons behind a possible boycott, while uniting NBA players as a movement going forward.


"As an oppressed community we are going on 500-plus years of being systemically targeted, used for our IP [intellectual property]/Talent, and also still being killed by the very people that are supposed to 'protect and serve' us.

"WE HAVE HAD ENOUGH!

"We are combating the issues that matter most: We will not accept the racial injustices that continue to be ignored in our communities. We will not be kept in the dark when it comes to our health and well-being. And we will not ignore the financial motivations/expectations that have prevented us historically from making sound decisions."

These player calls over the past few days have also included members of the WNBA and entertainment industry that want to be the voice for the oppressed within the black community.

Bradley and the players coalition want to hear from league office, owners and sponsors come up with a detailed plan on how to improve issues that are important to the people of color. The Lakers' guard also described how the players coalition wants better hiring practices of black front-office and head coaching candidates, while the NBA should donate to more organizations serving black communities and partner with black-owned businesses and arena vendors -- making league management a better reflection of the majority of its players.

While Bradley has expressed support for those NBA players that wanting to use their platforms in Orlando to speak on systemic racism, he said his coalition believes those efforts would have a much bigger impact with "our owners' help."


"Regardless of how much media coverage will be received, talking and raising awareness about social injustice isn't enough," Bradley told ESPN on Tuesday. "Are we that self-centered to believe no one in the world is aware of racism right now? That, as athletes, we solve the real issues by using our platforms to speak?

"We don't need to say more. We need to find a way to achieve more. Protesting during an anthem, wearing T-shirts is great, but we need to see real actions being put in to the works."

The NBA and National Basketball Players Association have been working together on how they will address these issues, but there is still no clear plan yet to reveal.

League commissioner Adam Silver, who appeared on a panel with former players Magic Johnson, Caron Butler and Chicago Mayor Lori Lightfoot for an NBA Together conversation on Tuesday, acknowledged that some players will choose to stay home and not travel to Orlando and finish the season.


"If they choose to make a choice not to play in the NBA and think they can do more dealing directly with social issues, I respect that," said Silver. "But I will say, we have this platform in Orlando and, as I've said, we've been in discussions with the Players Association, with individual players about how we can better use this platform with real substantive policy that we can impact over time."

According to Shams Charania of The Athletic, players have until June 24 to inform their team if they plan on not playing the rest of the season at Disney World next month.

As for Bradley and the players coalition they want the NBA to take league-wide action when it comes to their proposals before the restart of the season next month.


"The actual act of sitting out doesn't directly fight systemic racism," Bradley said to ESPN. "But it does highlight the reality that without black athletes, the NBA wouldn't be what it is today. The league has a responsibility to our communities in helping to empower us -- just as we have made the NBA brand strong."

Irving, who is out for the season with a shoulder injury and is one of six elected vice presidents of the NBPA, had a vote on June 5 that approved the league's plan for a 22-team resumption in Orlando and continues to spark conversations about his sudden change of heart.

The NBA season is scheduled to restart on July 30.